Days of Our Lives Spoilers for Wednesday, February 26: Maggie Confesses To Sonny – Chad Gloats To Gabi – Justin Is Blindsided 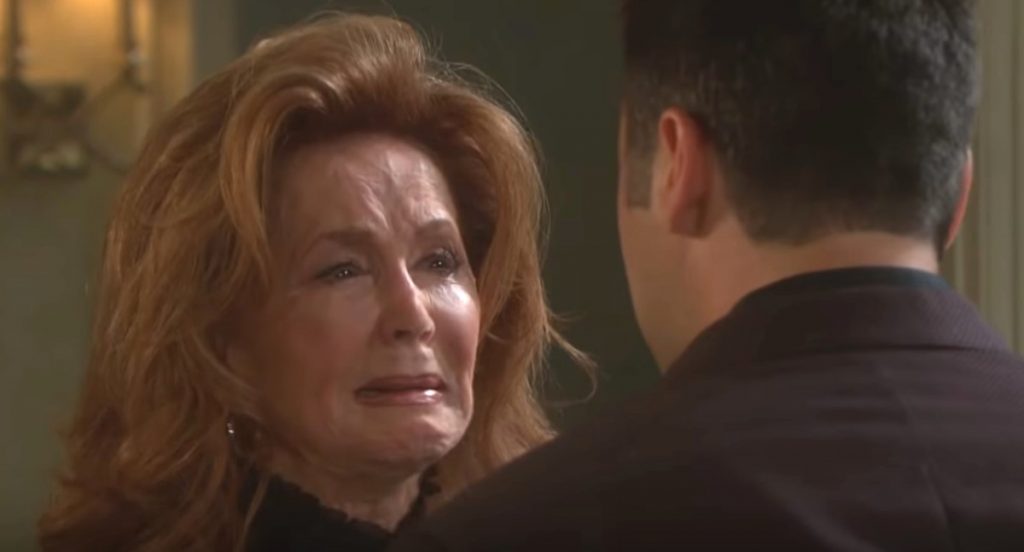 Maggie Kiriakis (Suzanne Rogers) confesses to Sonny Kiriakis (Freddie Smith) that it was she, not Will Horton (Chandler Massey) who was responsible for the death of his mother, Adrienne Kiriakis (Judi Evans) in an automobile accident on Mother’s Day.

She admitted she was driving drunk when the terrible crash happened, that could have killed her daughter Sarah Horton (Linsey Godfrey) as well and her unborn baby as she was in labor that night. As if Maggie doesn’t feel bad enough already, Sonny goes ballistic and starts shouting at her about driving drunk! Maggie begins to cry!

Chad DiMera (Billy Flynn) gloats to Gabi Hernandez DiMera (Camila Banus) about her being fired from her job as CEO of DiMera Enterprises! Viewers can expect Gabi to tear into Chad, figuring that he contacted the board of DiMera about her criminal charges and got her fired that way!

He will likely tell her that is exactly what happened because how can the board trust someone who is a criminal? Of course, that doesn’t include the founder, Chad’s father, but then that’s different! Gabi has somehow found her way out of jail, but the rest of the week is going to be full of conflict for Gabi!

After thinking it over and giving himself time for everything to process, and listening to the advice of his mother and grandmother, Eli Grant (Lamon Archey) decides to give his relationship with Lani Price (Sal Stowers) another try.

Days of Our Lives viewers will recall that she dumped him at the altar and broke his heart at what was supposed to be their wedding because she was being blackmailed by Gabi. Turnabout’s fair play and Lani put a halt to Eli’s wedding to Gabi and exposed her treachery and attempted murder of Eli’s grandmother, Julie Williams (Susan Seaforth Hayes) by an app on her phone that controlled her pacemaker!

Justin Kiriakis (Wally Kurth) is blindsided when “Steve Johnson” aka Stefano DiMera (Stephen Nichols) shows up on his doorstep! Justin will likely grill him on where his fiancée Kayla Brady (Mary Beth Evans) is and what he has done with her!

Kayla had taken out the bullet that “Steveano” had received when struggling over a gun with his son, Chad, and then had forced her to hide him and also to stay with him instead of going back to her duties at Salem University Hospital and her fiancé, Justin. Stefano wants to bargain with Justin for the return of Kayla but what will the bargain require in exchange for her safe return?