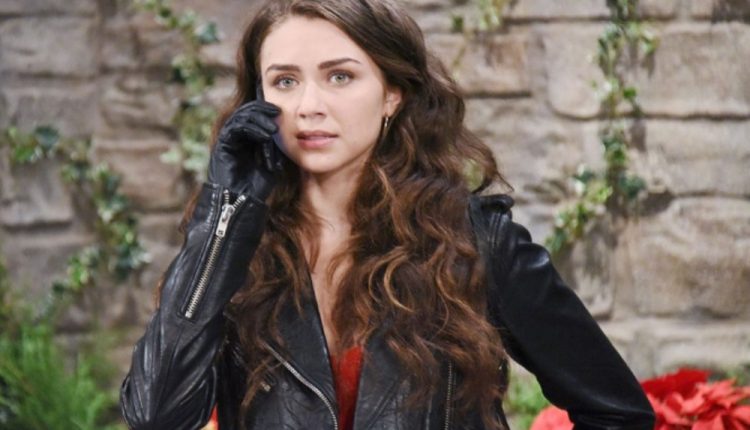 Days of Our Lives spoilers tease that Ciara Brady (Victoria Konefal) has a new theory regarding Jordan Ridgeway’s (Chrishell Shause) killer and she will share it in an upcoming episode of Days of Our Lives!

Ciara basically has to go back to square one and thinks back to when Jordan’s body was discovered. She was there, they had come back to the gatehouse and Ben Weston (Robert Scott Wilson) had noticed that there was even more disturbance than he had previously when someone had broken in one of the windows and he had made a police report, taken by Detective Rafe Hernandez (Galen Gering).

The only problem was back then that Eve Donovan (Kassie DePaiva) was the police commissioner back then. She would have paid little if any notice to Rafe’s report and may even have thrown it in the garbage! Ben made a terrible mistake by disturbing the crime scene, and especially when he took the scarf from around Jordan’s neck with his bare hands, but both he and Ciara were so in shock neither one was thinking about DNA evidence and fingerprints! Ciara HAS to try to get that police report!

DOOL Spoilers – Ciara Brady Needs To Pull From Her Heredity – What Would Bo Brady Do?

Ciara needs to pull from her heredity – what would her father, the late Bo Brady (Peter Reckell) have done? She doesn’t have anyone that can help her right now, Rafe, Roman Brady, (Josh Taylor) and even her brother Shawn Brady (Brandon Beemer) are all off chasing either Stefano DiMera (Stephen Nichols) or her and Shawn’s mother, Hope Brady (Kristian Alfonso) who has been turned into Princess Gina again!

She knew her mom was having some problems but she would have never guessed something like that! John Black (Drake Hogestyn) is gone too. How can she get that police report? She knows that any DNA or fingerprints from the original break-in are long gone – or are they?

No one has lived in the gatehouse since Ben was arrested – and now Chad and Abigail DiMera (Billy Flynn, Kate Mansi) are thinking about moving in. The gatehouse is now used for a storage building so trying to find any original evidence would probably be useless, and besides, Chad and Ben have bad blood between them and for good reason!

Days of Our Lives Spoilers – Back To The Police Report, But Can She Get It?

She’s going to have to go the police report route and figure out how to find out if Rafe’s original report is still on file, and if there were any fingerprints or any other evidence taken at the time. She also needs to find out if anyone knew that could have connections to Jordan may have moved into town close to that time because it’s possible that David Ridgeway’s (Caleb and Kyler Ends) birth father could have come looking for him.

What if Jordan had told him she gave the baby up for adoption because she didn’t want him to get access to him and he killed her for it? Perhaps Jordan had gone to the gatehouse earlier and left, and he figured that’s where she lived, and so he broke in looking for evidence of their baby and waited for her to return; she could have come back knowing Ciara was living there at the time to finish her off after the poisoned cupcake wound up in Rafe’s stomach instead of hers, and had come back to finish the job but instead she herself wound up being “finished”!

Days of Our Lives Spoilers And Recap Wednesday, February 5 – Gabi Learns About The Pacemaker; Kristen and Brady Make Plans