Days Of Our Lives Spoilers: Ciara Makes Pact With The Devil To Save Ben’s Life 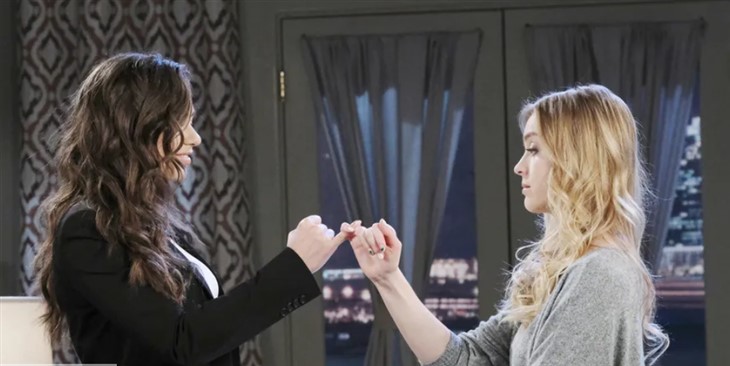 NBC Days of Our Lives spoilers reveal that after Ben Weston (Robert Scott Wilson) goes missing when the church is bombed, Ciara Brady (Victoria Konefal) starts investigating. Eventually, she joins forces with Claire Brady (Olivia Rose Keegan). The firestarter could become the key to solving the mystery and negotiating Ben’s release from those holding him hostage.

DOOL spoilers reveal that the “Cin” wedding is bombed and Ben is taken hostage for one reason. Someone wants revenge and we are thinking it’s Eve Donovan (Kassie DePaiva) and Eduardo Hernandez (A Martinez). Ben, who was dubbed the Necktie Killer, murdered Eve and Eduardo’s daughter, Paige Larson (True O’Brien) during his serial killer storyline. It is teased that Ben’s past will come back to haunt him and we know both Eve and Eduardo are returning soon.

After Ben goes missing, Rafe Hernandez (Galen Gering) works on the missing person’s case, as well as tries to figure out who bombed the church. He questions Claire because she is the most obvious suspect.

Meanwhile, Ciara will do her part to find Ben. She suspects Clyde Weston (James Read) is involved and confronts the diabolical career criminal. However, she ends up coming up empty and it’s clear he has nothing to do with the wedding explosion or Ben’s disappearance.

DOOL Spoilers – Making a Deal With the Devil

Days of Our Lives spoilers reveal that Ciara will make a deal with the devil. Despite not trusting Claire, she teams up with the resident firestarter. They are working toward the same goal, but for very different reasons. Ciara just wants to find her husband and save him from the trouble he’s in. Claire wants to clear her name but hopes she can also be redeemed if she helps save Ben’s life.

There is reason to believe that Claire will get redemption through this storyline. She could be the key to learning Eve is involved. Remember, the two used to be close, and after Paige’s death, Eve thought of Claire like she were her own child. Fans remember how terrible Eve felt when she learned that Claire tried setting Ciara on fire and that she would have to enter psychiatric treatment.

So, once they learn that Eve and Eduardo are behind this, could Claire use her history with the woman to negotiate Ben’s release? Could she find a way to reach Eve? She may explain that Ben didn’t kill Page, his mental illness did, just like Claire’s mental illness nearly killed Ciara. After everything, could Claire finally find the redemption that she so desperately craves?

Days of Our Lives News Updates: Deidre Hall And Her Twin Have An Art Collection For Sale