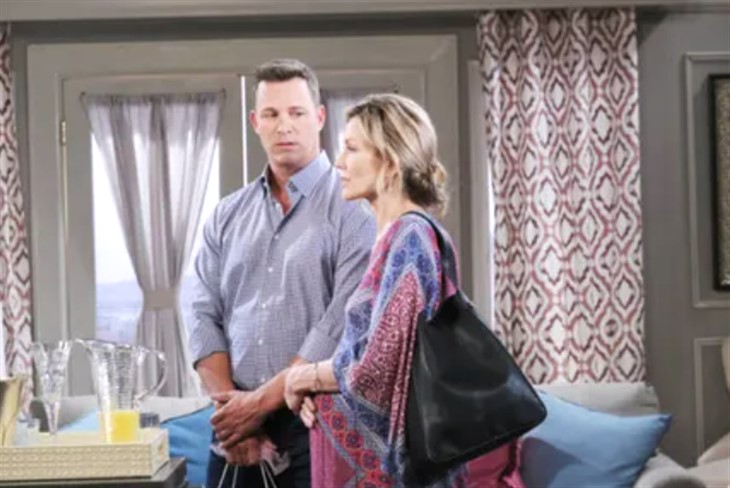 Days of Our Lives spoilers reveal that Brady Black (Eric Martsolf) and Kristen DiMera (Stacy Haiduk) were together on the run with their baby. However, their return will be filled with problems. Brady is irritated she risked everything to come back to Salem. Kristen ends up getting arrested. Plus, the two have an explosive fight about Victor Kiriakis (John Aniston).

DOOL spoilers reveal that Brady surprised Dr. Marlena Evans (Deidre Hall) by showing up in John Black’s (Drake Hogestyn) hospital room. Although she was happy to see him, she didn’t expect him to show up. But Brady explained that his father is on his deathbed and he hasn’t been there lately, but he is there now.

DOOL Spoilers – Kristen DiMera is Back

When Brady gets back to his room at the Salem Inn, he is surprised to find Kristen there. He gets upset about her risking everything to come back to Salem. If someone sees her, she will be arrested and hauled away. The whole reason why Brady left everything in Salem was to be with Kristen and the baby, not to risk throwing their lives away.

Days Of Our Lives Spoilers – Caught And Arrested

Days of Our Lives spoilers reveal that Kristen avoids detection for a while. However, she ultimately does get caught and arrested. That’s when she relies on Lani Price Grant (Sal Stowers) for help. Once Eli Grant (Lamon Archey) finds out, it will create problems with the newlyweds. It is hinted that it’s not what Lani does that jeopardizes Eli’s case, but rather what she doesn’t do. Could Lani end up not following the procedure, not filing paperwork, or checking in evidence? If so, could that leave a loophole for Kristen’s charges to be dismissed?

Days Of Our Lives Spoilers  – Fighting About Victor Kiriakis

The other issue with Brady and Kristen is Victor Kiriakis. It is confirmed that the two end up in a huge fight over the Kiriakis patriarch. Plus, it is implied that Brady will be asked to pick sides.

He isn’t a fan of Xander Cook Kiriakis (Paul Telfer), but will that lead him to side with Philip Kiriakis (Jay Kenneth Johnson)? Or will Brady throw a curveball by wanting the CEO position for himself? We will have to keep watching the NBC soap opera to find out what happens with “Bristen” and if their relationship is really meant to survive.