Days of Our Lives Spoilers: As Sarah Prepares To Flee, Rex Learns She’s On The Run 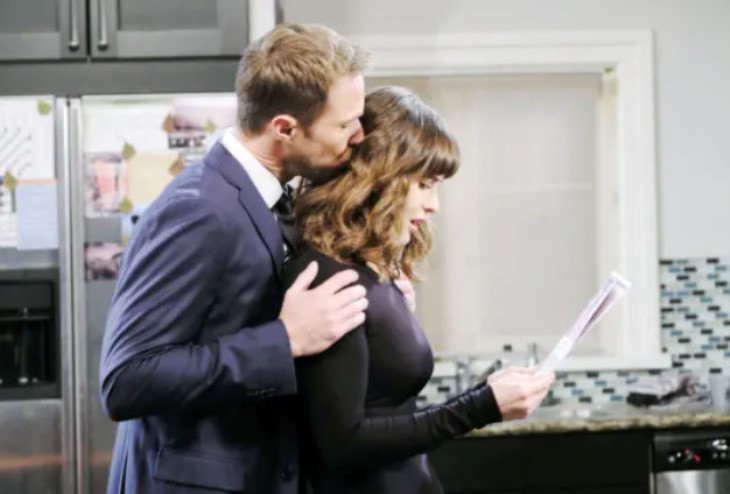 Days of Our Lives spoilers tease that just as Sarah Horton (Linsey Godfrey) prepares to flee Paris with the baby, Rex Brady (Kyle Lowder) learns she’s on the run and tries to stop her in an upcoming episode of Days of Our Lives!

Days of Our Lives Spoilers – Fancy Meeting You Here!

As Days of Our Lives, viewers will recall from a recent episode, Sarah unexpectedly ran into Rex as she had taken Rachel Isabella Black aka Mackenzie “Mickey” Horton (Josephine and Rosalind May) in her baby carriage to an outdoor café there in Paris, France where they have been living in Chad and Abby DiMera’s (Billy Flynn, Kate Mansi) old apartment in Paris. She made some excuses as to why she was there and why she had a baby with her, and he told her what he was doing there, and he absolutely fell in love with the baby!

She tries to act as normal as possible and also tries to get away from him as soon as possible without seeming guilty, defensive, or suspicious! She tells him she’s babysitting and doesn’t admit the baby is hers, although she can tell the wheels are turning in Rex’s head and she fears he may be wondering if the baby is theirs since she had slept with him and they had been married very close to the time that she had slept with Eric Brady (Greg Vaughan) and had become pregnant but didn’t know about it until after they had split up and Rex had left town.

She had gone through that line of questioning already when she first found out she was pregnant and decided there was no way Rex could have been the father! He finally gets a call and says he has to take it, and she takes her opportunity to take the baby and run, fearing that her place of safety in Paris may no longer be safe! But then, as long as he can’t track her to the apartment maybe she and “Mickey” will be safe there for a while!! So she evasively walks with her baby carriage taking a very non-direct route until she feels confident that Rex or no one else is following them and goes back to the apartment.

DOOL Spoilers – Rex Brady Takes A Call From The ISA

The ISA is now involved in the search for Sarah and Rachel and is contacting anyone from Salem who is anywhere in Europe, having struck out at locating them in their last known stop of London, Great Britain. They think Sarah may have either rented a car or taken a train to another location in Europe, and since Xander Kiriakis (Paul Telfer) had initially thought that she had taken the Titan jet to Paris, they check for possible contacts there who might be helping her and find out Rex is there.

This is the call he takes when Sarah and the baby make their escape from the outdoor café where she ran into him. He finds out that Sarah is a wanted fugitive and that she has kidnapped a baby, and his jaw drops as he is dumbfounded! Rex is torn – he knows that is not the Sarah he knows, and he doesn’t tell the ISA agent on the phone the truth. Before calling Sarah to find out what’s really going on, he calls Eric.

Eric is the last person he really wants to call, but Rex thinks Sarah and Eric may have still been together and he may want to know where she is! Eric gives Rex an earful – they have not been together for quite a while, Nicole Walker (Arianne Zucker) is alive and he is with her and Holly Jonas (Harlow and Scarlett Mallory) and Sarah was getting ready to marry Xander Kiriakis (Paul Telfer) and ran off with the baby!

Days Of Our Lives Spoilers: Someone Hospitalized For Hallucinations: Gabi Or Abby? https://t.co/l09Ppadb3j pic.twitter.com/60hMMgffpX

Eric goes to explain the baby switch and that he and Sarah’s baby died. Rex tells Eric that he will try and find Sarah and convince her to return to Salem with Rachel because if she gets a criminal record out of this her medical career could be ruined!