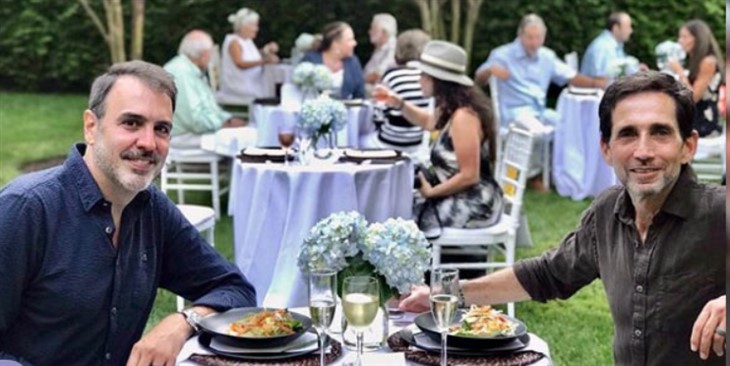 NBC Days of our Lives spoilers reveal that congratulations are in order for Ron Carlivati the head writer of the NBC daytime drama, as he recently got married!

He shared pictures from his wedding to David Rogal on Twitter and he and David could not look happier. Ron was also the head writer on One Life to Live and General Hospital.

According to Ron, he and David have been together for over 15 years and the two managed to pull off their wedding in just one week. Who needs a wedding planner with those kinds of organizational skills, right?

The ceremony apparently took place in East Hampton and Ron posted some absolutely gorgeous pics from the big day with the soap-referenced caption, “And for once nobody stopped the wedding…”

In the pics both Ron and David are dressed in casual elegant attire, in dark button-down shirts. It looks like the guests were treated to a garden party as behind the handsome men in one pic, we can see the guests dining at small round tables with white table cloths amid an expansive green outdoor setting. Fresh flowers and champagne are on the tables and the wedding cake looks too good to eat!

Ron and David’s cake has their initials on it and it’s bathed in white and milk chocolate ganache with smaller goodies encircling the bottom. One fan wrote, “Ron you so handsome congratulations!!!! Also, I want to bury my face in that case, god it looks so yummy.”

Of course, Ron received tons of congrats as well as a load of meme’s including one of DOOL’s Patch Johnson (Stephen Nichols) at one of his weddings!

The fans were eager to send their best wishes with comments like, “Congratulations!!!!! What a wonderful day!!! Wishing you and your husband all the best days of your lives!” and “Mazel Tov! Many years of love and happiness.”

It appeared that GH actor Parry Shen also sent his regards writing, “Congratulations! Awesome to know wonderful things are continuing to happen! We now have the SAME Anniversary!”

Parry took to his Insta recently to commemorate the 18th anniversary of his wedding to beautiful bride Kim Shen.

Days of Our Lives News Update: Drake Hogestyn Is Headed To The Hallmark Channelhttps://t.co/anWerKUtAo

Congratulations Ron And David On your Wonderful Milestone!