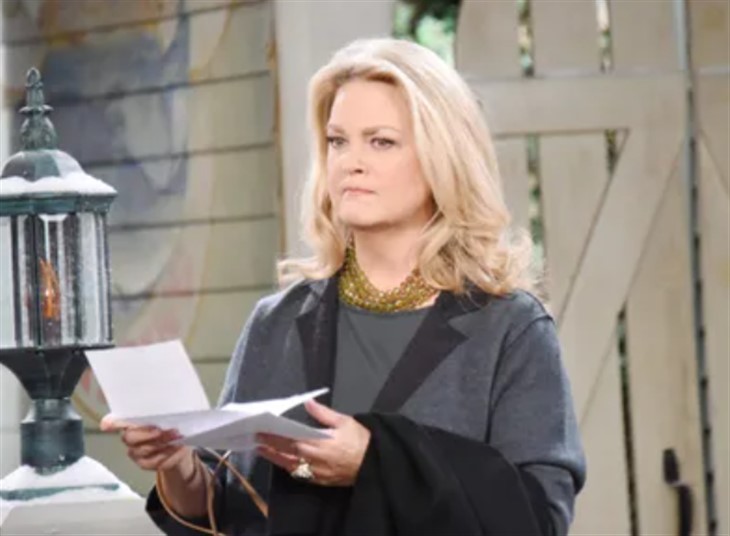 Days of Our Lives spoilers tease that Anna DiMera (Leann Hunley) may finally solve the mystery of Gwen Rizchech (Emily O’Brien) and who she is this winter on Days of Our Lives!

It looks like Anna and Tony DiMera (Thaao Penghlis) are probably in Salem for the holidays. In the DiMera mansion, they greet Chad and Abigail DiMera (Billy Flynn, Marci Miller) warmly; then Anna has a warning for Abigail about Gwen; she tells her she’s not as nice as she pretends to be! It sounds like Anna has run into Gwen before, or maybe she knows who she really is and what she’s about.

In Anna’s many travels around the world, it is possible that she either knows Gwen or knows of Gwen. Gwen mysteriously knows Dr. Wilhelm Rolf (William Utay) and he mysteriously knows her too, so it’s obvious that Gwen has an agenda and Anna seems to know to be suspicious of her. One thing is for certain, Gwen seems to want an easy way into the DiMera family. First, she was with Jake Lambert (Brandon Barash) although it is uncertain if she knew he was Stefan DiMera’s (Brandon Barash) twin.

Now she’s trying to get to Chad DiMera (Billy Flynn) and has drugged Abigail at least once, and has tried to a second time but someone has always interrupted her before she could do so. Perhaps Gwen has tried to get in the good graces of other DiMera men in the past – maybe Andre DiMera (Thaao Penghlis) and tried to attach herself to him. Gwen appears to be a young woman, no older than her twenties, but appearances can be deceiving!

DOOL Spoilers – Where Might Anna DiMeta Know Gwen Rizchech  From?

Anna could know Gwen or of Gwen from almost anywhere – she could have applied for jobs at DiMera offices overseas, for instance. Anna has run some offices herself – she was Tony’s assistant at one time, that is how they met and got involved. However, longtime DOOL viewers will recall they didn’t have the greatest start – she had been working for Stefano DiMera (Joseph Mascolo) and drugged Tony the first time they married in Las Vegas! They fell in love in spite of that, though! She also owns her own design company, and Gwen could have applied for a job or have worked for her there.

Days of Our Lives (DOOL) spoilers also show Anna has also been involved in the advertising business, both Lumberg Advertising and DiMera Advertising. However she knows her, Anna definitely knows that the young British woman is trouble with a capital T! Anna has spent a lot of time in Europe in between her times in Salem, the most recent time with Tony on a trip around the world. Both Anna and Tony may know of Gwen, but it is Anna who sounds the warning that she cannot be trusted! Gwen’s secret should be revealed sometime this winter!