Bold and Beautiful Spoilers: Sally Not Ready To Give Up, Manipulates Wyatt Into Letting Her Stay at His Home? 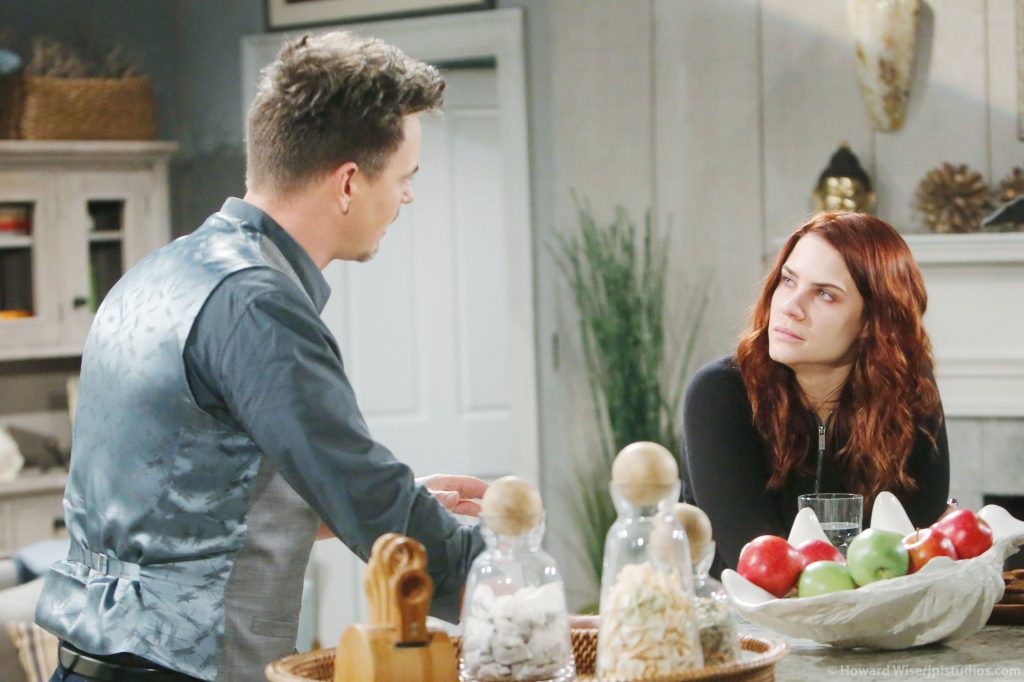 The Bold and the Beautiful spoilers suggest that Sally Spectra (Courtney Hope) isn’t finished with her attempts at emotionally blackmailing Wyatt Spencer (Darin Brooks). B&B fans know that even though Flo Fulton (Katrina Bowden) and Wyatt agreed to kick Sally out of Wyatt’s home, Sally may be more determined than ever to win Wyatt back.

B&B Spoilers – Sally Spectra Tries to Be Graceful Under Pressure

B&B viewers know that the cunning Sally Spectra understands that exploding in anger at Flo and Wyatt’s decision to make her move out of Wyatt’s home would be counterproductive. Instead, after awkwardly hobbling in to the living room where Flo and Wyatt delivered their uncomfortable news, Sally gracefully let them know how thankful she was for their care.

That didn’t seem to make Wyatt feel much better though. As he told Sally, he and Flo simply wanted to make Sally’s difficult situation as easy for her as possible. However, even though they really wanted to help Sally, Wyatt and Flo felt it was time for her to go. Of course, B&B fans know that the underlying reason for this decision was Sally’s failed attempt to emotionally blackmail Wyatt into getting back together with her. Smart B&B viewers know that Sally understands Wyatt and Flo’s motives as well.

Still, Sally played it off nicely … which gives her wiggle room when it comes to making future moves.

Now, Flo may have badly miscalculated when she allowed Wyatt to leave the door open for Sally to stay in his home just a little longer. First, Wyatt explained that Sally didn’t have to leave right away. He and Flo understood that it could take a little time to find alternate living arrangements. However, this is precisely the problem. Neither Flo nor Wyatt gave Sally a specific time frame for transitioning from Wyatt’s home to another place to live.

B&B fans just may see Sally dragging her feet. Viewers will likely watch as Sally pretends to reach out to her connections around town only to unfortunately discover their respective doors have all been shut in her face. Sally may tell Wyatt and Flo that she cannot move into her old place, or any new apartment or house alone for fear that her “disease” will worsen and no one will be there to help her. Sally might suggest that she cannot find an assisted care medical facility that is able to take her. Maybe those facilities aren’t familiar with the specifics of Sally’s condition. Who knows?

The point is that B&B viewers may agree that Sally will try to do everything she can to remain around Wyatt as long as humanly possible.

Bold and the Beautiful Spoilers: Brooke Vows To Fight For Ridge, No Holds Barred In Fight For Her Man https://t.co/T1rUnQ9Ifs pic.twitter.com/qFPPna750g

B&B Spoilers – Flo Fulton Has Her Work Cut Out

It’s obvious to many B&B viewers that Flo has deep suspicions of Sally’s behavior. Why won’t Sally seek out treatment? Isn’t Sally’s current refusal of any medical aid a direct contradiction of her character? (It is, and everyone knows it.) B&B fans know, however, that Sally’s time is limited. Viewers know that Sally’s pretense is wearing thin and Flo is leaning in to her own investigation.

While Sally has been doing a decent job of covering her tracks, even getting Dr. Penny Escobar (Monica Ruiz) to lie on her behalf, Flo may soon cut through her web of lies. Viewers already know that Flo wasn’t satisfied with Penny’s answers when she visited her in her office. Moreover, when Flo noticed the fashion drawings on Penny’s desk it became clear that the doctor might have an interest in Sally outside of medicine.

Flo is sure to continue digging. Meanwhile for Sally, the clock is ticking. How the entire drama plays itself out is anybody’s guess right now. However, one thing is clear. Things don’t look good for Sally’s efforts to get Wyatt back.

Maybe Sally should have gone online and read something about male psychology before she got all needy. Sally could have saved herself a lot of what may amount to wasted effort.

The Bold And The Beautiful Comings And Goings: Expect More Douglas Forrester, Plus…