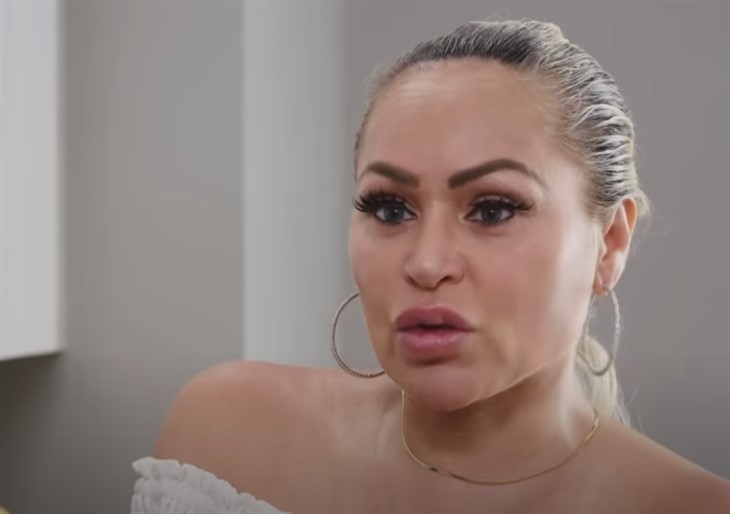 Rumor has it that TLC 90 day Fiancé Darcey Silva may have paid for her own engagement ring according to a Darcey and Stacey Fans Instagram account. Darcey herself has posted on the fan’s account she felt beautiful and blessed, but she hasn’t confessed! The big question is why would she buy her own ring – is Georgi Rusev broke?

On the fan account, “darceyandstaceyfans” on Instagram, a post from earlier in the day on October 12, 2020, shows Darcey and Stacey in a jewelry store, where Darcey apparently was trying on rings. Georgi was not seen in the photo, but Darcey has a large diamond ring on her finger. It appears to be a square or rectangular shape with little diamonds surrounding a larger one.

Later in the day, photos and an engagement announcement came out with Georgi and Darcey posing for engagement photos – and Darcey has on a similar ring, but it’s round. The rumors of Darcey buying her own ring came from the photo in the fan’s account where several fans commented that she must be buying her own ring. True, the twins are famous for doing everything together, but Stacey snuck her marriage to Florian Sukaj past Darcey, so why would they be picking Darcey’s ring out together instead of Darcey and Georgi picking it out?

For all the fans assuming Darcey was paying for her own ring know, Georgi may have been the one taking the picture! Darcey hasn’t commented back to the fans who posted about buying her own ring, although she posted thank you messages on two photos that were posted of her engagement, taken from an article in “People Magazine” which was promoted as an exclusive.

Some clarity may come from the article in “People Magazine” where Georgi talks about buying the ring. Apparently, the engagement happened rather quickly because he says it was “really hard” to make calls, reserve the boat (where he proposed on, according to the photos) and the dinner (likely on the boat) and he also says it was “really hard” to find the ring! The engagement photos show them standing on a boat, with the water in the background. Georgi is duded up in a pink jacket, white shirt, and gray plaid pants, his hair in a man bun. Darcey is gorgeous in a tight white dress that appears to be pearl-studded.

She actually accepted the proposal in June and the couple just has made it public. She says she still feels newly engaged, even after four months. Darcey says she immediately told her daughters, Aspen and Anniko Bolleck. Darcey hopes for a beach wedding, possibly with an additional wedding in Georgi’s home country of Bulgaria. As far as who paid for the ring, neither Darcey nor Georgi have officially said, but in the “People” article, it is implied that Georgi did although Darcey with her sister Stacey may have picked it out.

Stay tuned to “90 Day Fiancé-Darcey and Stacey” on TLC, and keep checking here frequently for all the latest news, updates, and gossip about all your fave “90 Day Fiancé” shows and stars!