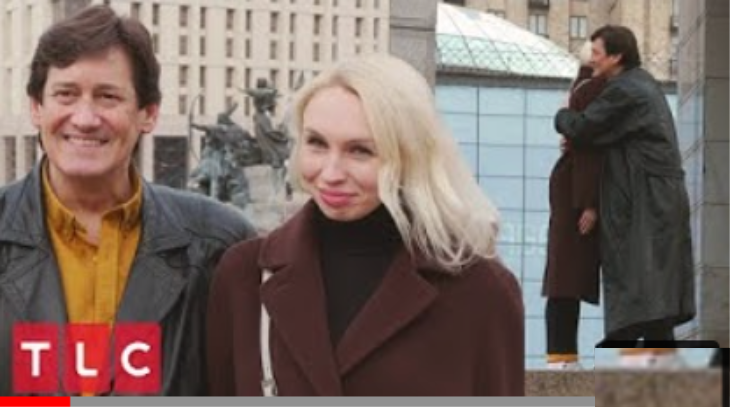 TLC 90 Day Fiance updates and spoilers reveal while ’90 Day Fiancé star David has finally met Lana, the whole seven-year relationship might have been a long con.

It’s been seven years since 90 Day Fiancé star David Murphey first met Lana on a Russian online dating website. On several occasions, he has traveled to Ukraine to meet up with his girlfriend but had no success.

Fans believed from the start that Lana was catfishing David and it certainly looked that way. He did finally meet her, but it turns out David was paying by the minute to chat to Lana on the dating website. It cost him tens of thousands of dollars and it turns out she may have earned a commission.

Over the run of the show, fans have seen David heading to Ukraine to meet Lana. Each time she failed to appear and he was heartbroken. A private investigator turned up copies of Lana’s photo all over the Internet on other dating websites. It definitely looked like a scam.

Many 90 Day Fiancé fans and critics believed Lana was a fake and was only involved for the money. David recently did meet the woman of his dreams in Ukraine, which shocked fans as she did look like the woman from all those photos. David was ecstatic, but his happiness was short-lived as they have reportedly split.

As reported by Screen Rant, a leaked 90 Day Fiancé: Before the 90 Days tell-all revealed Lisa, Usman, Yolanda, and David being interviewed by TLC host Shaun. The discussion headed into scammer territory, with the stars discussing the difference between Russian and Nigerian scammers.

Lisa appears to know something about this and she even went so far as to call Russian women prostitutes. While she doesn’t believe they were planning to destroy David, she does think they are out to get his money. According to Lisa, they will likely carry playing with him, as they are prostitutes.

David found this statement a little harsh, while Shaun goes on to ask Lisa if she really believes Lana is a prostitute. Lisa said no, she doesn’t believe that. She was only talking about Russian women and Lana is from Ukraine.

As the conversation continues, Lisa asks David how much money he has spent on the online dating site. He admits he has spent tens of thousands on the pay-by-the-minute Russian website. David says the owners of the dating site are not Russian and he doesn’t think Lana has profited from his time on the site.

TLC 90 Day Fiancé Spoilers: Varya Makes Surprise Trip To US, but Geoffrey Has Moved On #90DayFiancehttps://t.co/1821IHXofp

Meanwhile, 90 Day Fiancé fans still believe Lana is catfishing David. The main reason for this thinking is the fact Lana will only chat to him via the online dating site, while he coughs up for every minute of their time together. This does, indeed, sound fishy!

After David eventually did meet Lana, he reportedly proposed marriage, but apparently they are no longer together. Fans are likely not that surprised by this. David, 60, does seem to be naïve when it comes to Lana and cannot accept reality. The fact he has finally met her points to her finally deciding she has had enough and is now cutting ties. While David says Lana has “suffered too much stress” relating to the TLC reality show, she has probably earned enough commission to call it a day.

Keep watching the drama on 90 Day Fiancé: Before the 90 Days on Sundays at 8 pm ET/PT on TLC.