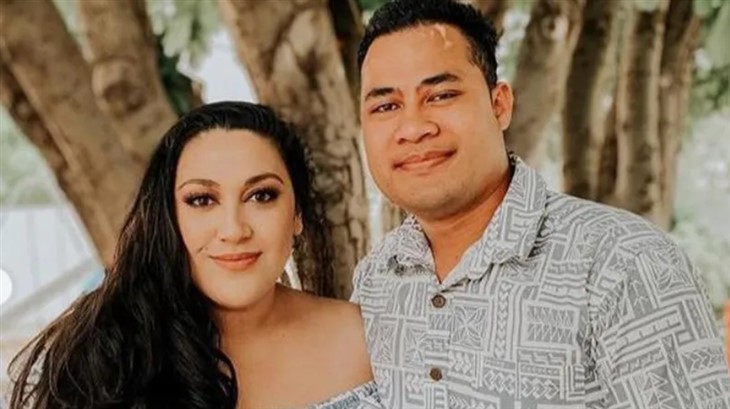 TLC’s “90 Day Fiancé-Happily Ever After” stars Asuelu Pulaa and Kalani Fagaata have been going through a very rough patch this season, and his mother and sisters’ demands that he put them first instead of his wife and their two little boys doesn’t help matters any! In this week’s episode, Asuelu set his mother Lesina straight over what she said to Kalani!

The trip to Washington to see Asuelu’s mother, Lesina, and his two half-sisters, Tammy and Rosa, did more harm than good after Kalani and Asuelu compromised on that trip instead of their going to Samoa to see his father and siblings there.

As viewers will recall, Asuelu was very homesick, but his sister had called him to tell him there was a measles outbreak on Samoa, and Kalani didn’t want to expose their two little boys, Oliver and Kennedy – the older one had been vaccinated but had a bad reaction to the shot, and the younger one was too young for the vaccination.

The intention was to help Asuelu not be so homesick for his family, but what happened instead was even more drama, and conflict to the point that it has almost split the couple apart, and Kalani gave Asuelu an ultimatum that they go to marriage counseling or couples therapy, sometimes the terms are used interchangeably but couples therapy goes more in-depth than marriage counseling does.

After they get out of their couples therapy appointment, Asuelu decides to bring his mother and sisters to Utah to have a serious sit down with them, and also to bring them together with Kalani’s family. But first, he has a serious confrontation with his mother Lesina.

90 Day Fiance Spoilers – Asuelu Picks Lesina And Rosa Up From The Airport, Tammy To Arrive Later

Asuelu picks Lesina and Rosa up from the airport, with Tammy to arrive later. He takes them to the hotel where he has set up for them to stay, checks in, and then he sits them down and confronts Lesina in particular about things that Kalani told him were said to her. Lesina wants to know where Kalani and the children are and he tells them they stayed at home. She wants to know if Kalani didn’t want to see her and the sisters. She asks Asuelu if Kalani is still mad at her.

Then Asuelu lets her have it! He tells her that Kalani told him that she told her that he should divorce her and go to Samoa, and leave the kids behind! Lesina’s response was to tell him that Kalani didn’t want to send her money! Asuelu is incredulous – and asks her if she doesn’t love her own grandchildren?! Lesina wants Asuelu to be strong and tells him he can stand on his own without a wife.

Asuelu is having none of it, and tells her to calm down and apologize to Kalani for the things that she said to her! Lesina continues with the train of thought that Asuelu puts Kalani first in his mind instead of her, and that is why she wants Asuelu to divorce Kalani! Lesina continues her digs, and Asuelu becomes angrier and angrier at her continued insistence that he divorce his wife. He tells her if he loves him then she has to love Kalani as well because they are part of each other.

Lesina tells the cameras that she thinks if Kalani knows that Asuelu would divorce her, she’ll be scared and become a good wife to him – meaning a wife that understands his mother comes first and his wife and children come second! Lesina asks Asuelu if he will come to see her the next day and he drops the bomb that both families will be meeting and tells her he doesn’t want any anger issues from her at the meeting. However, he worries that things will explode and Lesina will be the causative factor!

Days of Our Lives Spoilers: Kristen DiMera Finds Herself Behind Bars, Brady Vows To Get Her Out!