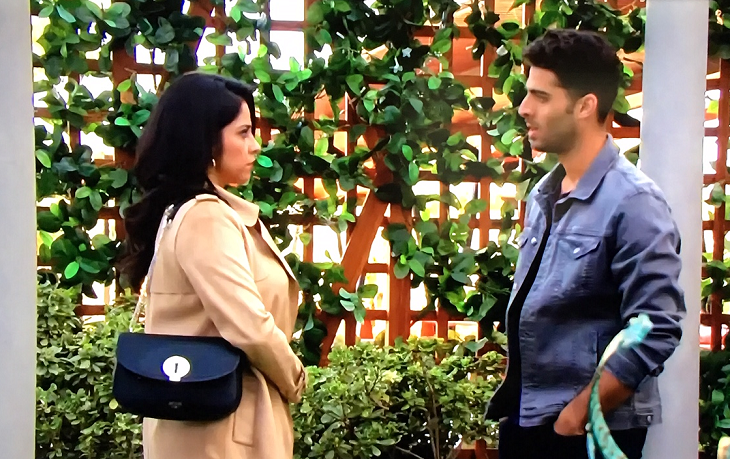 “The Young and the Restless” (YR) recap for Tuesday, April 16, 2019 reveals that over at the Abbott mansion, Summer Newman (Hunter King) makes plans to share ideas with Jack Abbott (Peter Bergman) before leaving. Kyle Abbott (Michael Mealor) tells Jack that Summer knows what happened with Lola Rosales (Sasha Calle), but he couldn’t tell her he wants to be with Lola. Jack warns she’s Phyllis Summers (Gina Tognoni) daughter and can make things difficult for him and Jabot. Kyle decides he’ll convince Summer she doesn’t want to be with him.

At the new restaurant, Y&R’s Abby Newman (Melissa Ordway) has nothing to say to Arturo Rosales (Jason Canela), but he apologizes and admits he may have partly been in love with the idea of her. But he wasn’t in it for the flash – he loves her and what happened with Mia Rosales (Noemi Gonzalez) meant nothing. Abby scoffs that he threw it all away for no reason. Arturo wants to be better. Abby believes he’s genuinely sorry and she’s cheated in the past – he deserves a second chance too. Mia appears. Abby orders her out but she won’t go without Arturo. Abby sends them both packing.

Later, Kyle arrives to see Lola and admits he didn’t tell Summer he was ending things – he couldn’t. Lola sighs, “Because you still love her.” Kyle protests – he loves Lola – but has to find a way to end things that won’t cause Summer to seek revenge. Lola asks that he not have sex with Summer again and kisses him as they declare their love. Lola walks away and Summer appears – she saw Kyle’s car. He suggests lunch. Elsewhere, Lola asks Abby about Arturo. Abby relays they had a good talk until Mia showed up – she’s always between them.

At Crimson Lights, Christine Williams (Lauralee Bell) observes that Paul Williams (Doug Davidson) is testing Rey Rosales (Jordi Vilasuso). Paul notes Rey backed off when Lola’s case went cold, which is suspect. He thinks he knows more than he’s saying. Paul updates her on Rey’s claim that Mia was with Arturo and wonders if they’re in it together. Nikki Newman (Melody Thomas Scott) appears – she needs Paul’s help looking into Victor’s activities in Nevada. Paul can’t help her and tries to reassure her.

Y&R’s Rey arrives at Sharon Newman’s (Sharon Case) place and admits he knows who attacked Lola – it was Mia, who believed she was Abby. Sharon learns he started to arrest her but she told him she was pregnant. She wonders what he’ll do if the baby’is Arturo’s. Rey feels the baby doesn’t deserve to be born in prison. He lets her know Paul put him back on the case – he’s testing him. They hope this won’t blow up.

In Chancellor Park, Arturo angrily asks Mia what’s so important she had to drag him away from Abby.  Mia needs him to say he was with her the night Lola was attacked. Mia denies it as Arturo puts the pieces together and realizes she attacked Lola, thinking she was Abby.

He asks why she thinks he’d lift a finger to help her. Mia replies that she’s pregnant, and the baby could be his. Arturo doesn’t believe her, so she pulls out the ultrasound photo. She believes in her heart the baby is Rey’s but she’s three and a half months along, so he should do the math. Arturo stalks off as she hollers, “What are you going to do?”

At the coffee house, Y&R’s Rey runs into Nikki, who thanks him for clearing her name, and Victoria’s. She admits she’s worried about Victor, who has been taking trips to Las Vegas and offers to pay him to find out what he’s doing there. Rey will consider it.

Young And The Restless Spoilers – Summer Newman Determined To Hold On

On the patio, Paul Williams and Christine Williams make a date for pizza and bowling before she leaves. Paul watches as, inside, Arturo apologizes to Rey for sleeping with Mia – he knows she’s pregnant. Rey warns they’ve a situation and he better be prepared to step up. Arturo will do whatever is required to protect the baby. As Sharon joins Rey, Paul approaches. Sharon lets them talk.

In a booth, Summer realizes Kyle is thinking about Lola. Kyle tells her Phyllis has photos of him and Lola Rosales and threatened his dad. Summer’s incensed her mother tried to trash her marriage – she won’t let anyone come between them.

In the park, Rey tells Paul that Arturo confirmed he was with Mia on the night of the attack. He suggests Lola just fell and wasn’t attacked. Paul’s unconvinced. Outside the new restaurant, Arturo looks at the ultrasound photo. Inside, Abby apologizes to Lola for venting about Arturo and Mia. They drink to success and happiness.

‘Young And The Restless’ Spoilers: Summer Won’t Back Down As Lola Fights For Kyle https://t.co/nlBVfjt1Yy pic.twitter.com/jdsSzX2hMX

At the Abbott mansion, Jack updates Dina Mergeron (Marla Adams) on the new plans for Jabot. She thinks he’s ruining his father’s legacy. At Newman Enterprises, Nikki looks at the psychiatrist bill and vows to find out what Victor’s up to. And that’s a wrap. Don’t forget to check often with Soap Opera Spy for all your soap needs!

‘Days of Our Lives’ Spoilers & Recap Tuesday, April 16: Gabi Manipulates Stefan – Will Has A Seizure

MUST WATCH ‘General Hospital’ Preview Video Wednesday, April 17: Shiloh Has A Secret Weapon to Use Against Jason