‘Villy’ loves Katie (Sienna Mercuri) on ‘The Young and the Restless’. Victoria Newman (Amelia Heinle) and Billy (Jason Thompson) also have long loved each other. Days after seemingly deciding not to jump start a new relationship, the shocking disappearance of their only biological child may serve to resurrect revival plans.

In yet another twist in the endless J.T. (Thad Luckinbill) storyline mystery, Katie appears to be the victim of whoever the multidimensional villain actually is. Feeling Ian Wardish (Ray Wise), ‘Villy’s’ little girl being potentially kidnapped, unless this isn’t that, injects a bonding drama moment for one of Y&R’s most beloved middle-aged couples.

Young And The Restless Spoilers – Hope For Villy

There’s no doubt that Victoria and Billy feel more strongly for each other than they do for another other alternative romantic partners. But sometimes love just isn’t enough, or so both parties agreed to think as of last week. 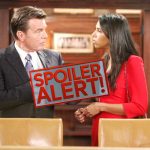 Thompson has killed as the latest edition of Billy since he debuted at the start of 2016. However, this ‘Billy-boy’ has never had the chance to spend relationship time with Victoria. They’ve flirted and fought and recently agreed to not get back together. But that was just prior to the Katie crisis.

Billy’s gut-punching line about not being able to live through another Delia (Sophie Pollono) type scenario evoked memories of the darkest storyline this decade. Here’s hoping a sequel to that isn’t at all possible.

Recent ‘Vane’ attempts indicated that departed executive producer and head writer Mal Young and his team were crafting a ‘Villy’ and ‘Lane’ alternative. Devoted followers of this comprehensive soap site know that Young’s departure allows for this course to be corrected, if Tony Morina and Josh Griffith are agreeing to do so.

In the meantime, Katie is Vickie and Billy’s forced focus. Sure, they’ll be prone to frantic feelings during this dilemma, which could make reunion hopes appear impossible. But Victor (Eric Braeden) is sure to prove helpful assistance, which should, eventually, allow Katie’s parents to celebrate her safe return and possibly, their own couple’s reboot.

Will couples crumble this week on #YR? Don’t miss that and Billy and Victoria’s search for Katie coming up on The Young and the Restless. pic.twitter.com/WNzSwvDbYW