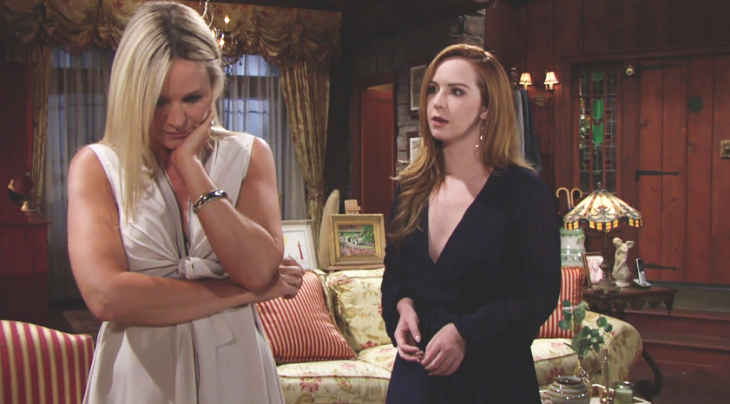 Mariah Copeland (Camryn Grimes) is worried about her mother on ‘The Young and the Restless’. Like many people, she sees Sharon Newman’s (Sharon Case) willing involvement with Adam Newman (Mark Grossman) as the lead-in to her being hurt by him again.

But Mariah’s warning, to end the involvement with Adam, wasn’t initially heeded by Sharon. She’s apparently come under his spell, as her daughter suggested. Based on past history and both character’s personality types, it might be hard to disagree with Mariah’s assessment.

How Sharon ever got beyond Adam stealing Faith Newman (Alyvia Alyn Lind) from her is an eternally ask-able question. But Case’s character did and came to have a relationship with him.

Young And The Restless Spoilers – Adam Newman Has Saved Her Life

In fact, Sharon actually credits Adam with saving her life on more than one occasion. That drove her to help Victor Newman (Eric Braeden), when he was trying to help Adam restore his memory.

Sharon flew to Las Vegas, Nevada, with few questions asked, and proved to be the only person who was able to get through to him. Spider, as he was then calling himself, agreed to return to Genoa City, Wisconsin. Sharon just said that Adam has been lied to all of his life. That’s a stretch and overlooks the issue of him having lied to promote any agenda since he’s become an adult.

Chloe Mitchell (Elizabeth Hendrickson) has twice tried to eliminate Adam. Once at the cabin, circa September 2016, when Justin Hartley (Adam) portrayed the character. Then, in broad daylight a shot rang out after Adam opened the front door of the tack house and saw Chloe locked and loaded.

Now, even Adam doesn’t deserve that. But Sharon’s default to his enabler, which is exactly what’s happened, feeds Adam’s need to always be the victim. Meanwhile, he produces scores of them as his life lurches forward.

Rey Rosales (Jordi Vilasuso) had enough of Sharon’s rationalizing the issue. Instead of allowing Adam to continue poisoning their relationship, Rey told Sharon that they were through. Even that wasn’t enough to make her say that she wouldn’t be involved with him any longer.

In effect, Sharon can’t give Adam up. Viewers can term it however they like, but for Sharon it’s her way of expressing a form of love for Adam. That doesn’t seem to project to her taking Mariah’s advice. But this is daytime, so it could happen.

Fans of ‘The Young and the Restless’ rightfully express their opinions on a regular basis. So, will Mariah’s warning change Sharon’s mind about Adam? Please vote in our poll below!

Days Of Our Lives Rumor: Was Tony Resurrected By Dr. Rolf’s Serum?