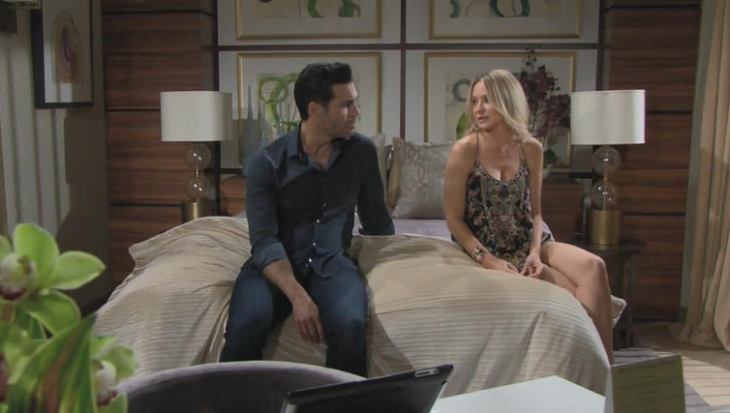 The Young and the Restless rumors indicate that Adam Newman’s (Mark Grossman) return will cause problems for Sharon Newman (Sharon Case) and Rey Rosales (Jordi Vilasuso).

As Y&R fans know, Sharon and Adam were romantically involved years ago and were married at one time. The couple’s relationship was criticized by viewers because Adam stole Sharon’s daughter Faith Newman (Alyvia Alyn Lind) and made Sharon believe the baby was dead.

Eventually, Sharon forgave Adam for his deception and the two remained friends. Adam went on to marry Chelsea Lawson (Melissa Claire Egan). Meanwhile, Sharon’s love life has been filled with turmoil and heartache.

Many fans loved Adam and Sharon together and wished the couple would get back together. Now, it looks like they may get their wish.

Young And The Restless Spoilers – Heading For Shadam Reunion?

Victor Newman (Eric Braeden) sought Sharon’s help in getting through to Adam in hopes of restoring his memory. While helping Adam, Sharon has been reflecting on their past relationship and all signs are pointing to a Shadam reunion.

Rey and Sharon went to Las Vegas to find out what Victor was up to. Upon discovering that Adam was alive, Sharon explained her history with Adam to Rey. Sharon is going to be spending a lot of time with Adam as she helps him regain his memory and readjust to life in Genoa City.

Rey isn’t going to like Sharon spending time with another man. Given his history with his ex-wife Mia Rosales (Noemi Gonzalez), he is going to be cautious in his relationship with Sharon.

After learning about Adam’s past misdeeds, Rey is going to be suspicious of Mr. Newman’s motives. He’ll try to put an end to Sharon and Adam’s friendship. This could lead to problems in Rey’s relationship with Sharon.

Sharon is going to be stuck in a tough situation. She loves Rey, but she’s also loyal to Adam.

Young And The Restless Spoilers: Who Will Be Adam Newman’s Love Interest? https://t.co/96qFr3zmqD pic.twitter.com/u1TxK8PfkF

Even though Victor is welcoming Adam home, the rest of the Newmans aren’t. Plus, Adam’s wife and son are no longer in Genoa City, which means he has no one to support him, except for Sharon.

Do you think Adam will cause trouble for Rey and Sharon?