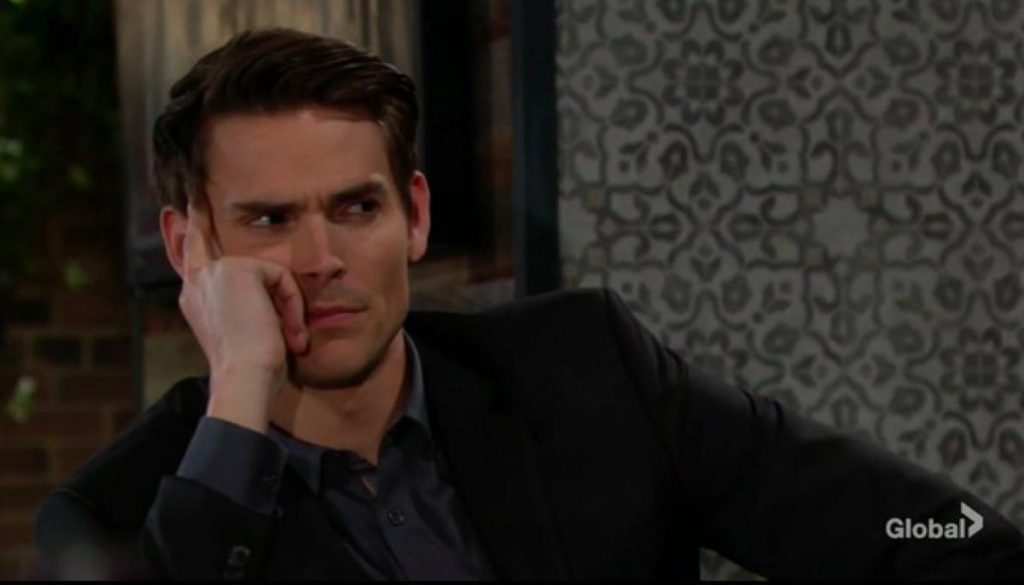 The Young and the Restless spoilers for Wednesday, July 31, tease that Adam Newman (Mark Grossman) will approach Jack Abbott (Peter Bergman) at Crimson Lights, and Jack will immediately express that he’s ticked off at him. They’ll sit down and discuss Christian Newman (Jamie and Alister Tobias), and Jack will suggest that Adam develop a rapport with Christian and put him first, and it will appear that Adam is listening.

Meanwhile, at Victoria Newman (Amelia Heinle) and Billy Abbott’s (Jason Thompson) place, Victoria will express her concern over what Billy’s going through. Victoria will wish that Billy would have come to her instead of going to Sharon Newman (Sharon Case).

Billy will say that there’s a reason he kept everything from Victoria – he was ashamed that it was happening, and he felt like she’d think he was letting her down. Victoria will suggest that Billy see a professional, and Billy will say that he’s considering it.

At Jabot, Jack will arrive and greet Kyle Abbott (Michael Mealor). Talk will turn to the wedding, and Kyle will lament that it won’t be the wedding that he and Lola Rosales (Sasha Calle) always dreamed of, and that he doesn’t think he can fix it. He’ll update Jack on the Celeste Rosales (Eva LaRue) situation, and Jack will offer his encouragement.

Next on Y&R, at Nick Newman’s (Joshua Morrow) house, Rey Rosales (Jordi Vilasuso) will tell Nick that he’s quitting the investigation into Adam because his life has gone to hell ever since he started – he’s out. Talk will turn to his breakup with Sharon and how Adam has wormed his way into Sharon’s head. Rey will apologize for leaving Nick in the lurch, but Nick will completely understand.

Later, Rey will encounter Paul Williams (Doug Davidson) at Crimson Lights. He’ll immediately put it out there that he misses being a cop and that he wants to come back to work. Paul will balk because Rey chose to deceive him where Mia Rosales (Noemi Gonzalez) was concerned, but Rey will make a pretty good case. Paul will agree to take him back, but no more infractions or going rogue.

At Dark Horse, Theo Vanderway (Tyler Johnson) will approach a very busy Phyllis Summers (Michelle Stafford) and update her about his big ideas for the Grand Phoenix opening. But Phyllis won’t have time to listen; she’s got a couple of big deals closing today…deals that she’ll say could change everything for her.

Phyllis will then swing by Nick’s house, but Nick won’t be interested in hearing her sympathy about what happened with Christian or anything else from her. She’ll say that Dark Horse has divested itself of most of its properties and that they’re now owned by a shell company called Amends that is being financed by Newman…and that Adam’s unaware of it. She’ll say that she felt she owed Nick, and that all she wants is a clean slate.

Nick will be truly grateful and will say that, for today, they can start over. Still, he’ll be upset that she betrayed his trust to begin with. Phyllis will say that this is a win for both of them.

Next on Y&R, at Jabot, Billy will arrive to talk to Jack, and he’ll fill his brother in on his recent bout of insomnia and nightmares. Phyllis will burst in the office, annoying both Jack and Billy, and she’ll say she has an offer they won’t be able to refuse – she’d like to sell them the Jaboutique properties so they can own them outright. Jack will balk and say he was just with Adam, who didn’t mention any of this. But Billy will want to hear Phyllis out.

Phyllis will show Jack a proposal, and Billy will say that it’s too good to pass up. Phyllis will want an answer right then and there, and Jack will accept. After Phyllis leaves, Jack will be thrilled, but Billy will steer the conversation back to Adam. Billy will admit that he’s still having a tough time with what Adam did to his daughter. Jack will suggest a therapist, as Billy stews.

Later, Christine and Paul will meet up in the park and fill him in on Michael’s offer to take over as DA so that she can retire. Christine will have really warmed up to the idea, and Paul will be supportive. He’ll understand completely, and the two will kiss.

Next on Y&R, in Chancellor Park, Adam will approach Victoria and claim to be onto her “trickery.” Turns out, he’ll be talking about visitation with Christian. He’ll want to arrange a visit, but Victoria will say that she’s very busy and that she’ll review her calendar, leaving Adam frustrated. Adam will then take a call from Michael, who will relay that Christine is willing to consider resigning right away, in which case the job will go to him.

At Newman, Nick will arrive to see Victoria. He’ll want updates on Christian, who’s at camp and having a good time. Nick will reference his visit with Phyllis and the Dark Horse properties. Nick will be surprised that the two of them worked together to make it happen, and Victoria will say that miracles can happen. Nick will just have to come up with a name for his new company.

Nick will then reveal that he just wants a few of the properties and projects from Dark Horse, but that Victoria and Neman can have the rest to do with what she’d like. Nick will say that he’s going to go back on a quest to find himself, and that she’ll see what he means.

Adam Newman Gets One Over On Phyllis Summer

Next on Y&R, Phyllis will return to Dark Horse to find Adam in her chair. He’ll ask if there’s anything she wants to tell him. She’ll be happy to say it to his face…she sold most of Dark Horse. He’ll say that he knows, and he wanted to see if she’d cop to it. She’ll tell Adam that he has no idea how much she loves sticking it to him.

Adam will remind her that all the profits from the sale will go to Dark Horse, and Phyllis will say that she’s not leaving empty handed because the Grand Phoenix was acquired by Summertime Inc. and belongs to her. Adam will tell her to read the fine print…that the deed was for a property in Detroit that’s set for demolition in a month.

Adam will gloat about his little victory, and he’ll even offer to let her keep the penthouse in the real hotel that she designed. She’ll angrily tell him that she can’t wait to wipe that smirk off his face.

Finally, on Wednesday’s new episode of Y&R, at Society, Kyle will arrive, having been summoned by Theo, and he’ll be angry that Theo is in Lola’s restaurant. Theo will want to talk, and he’ll reference how Kyle cleaned up a mess that could have taken them both down. Kyle will tell him to try to hold that incident over his head. Theo will say that what happens in New York stays in New York, and Kyle will say that it had better.