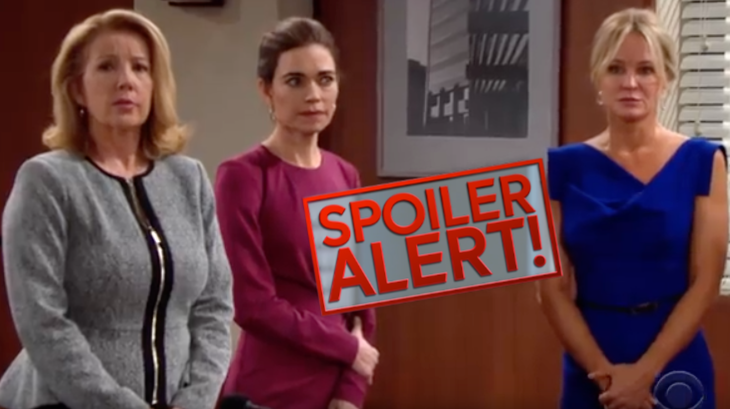 “Young and the Restless” spoilers for Tuesday, March 12, tease that Sharon Newman (Sharon Case) will feel a chill from her fellow cover-up crew members. In a holding room, Nikki Newman (Melody Thomas Scott) and Victoria Newman (Amelia Heinle) voice their displeasure over Sharon’s confession. She reminds them she recanted, but it’s clear that Sharon indeed put this trial in motion.

While the ladies await a verdict, they get some visitors. Nick Newman (Joshua Morrow) reassures and embraces an apologetic Sharon. He puts the blame on Rey Rosales (Jordi Vilasuso) for manipulating Sharon and taking advantage of her good heart. Billy Abbott (Jason Thompson) also speaks with Victoria, who’s remorseful about leaving him in the dark on what was going on.

Billy and Nick promise to take care of the kids no matter what happens, so that gives the girls’ night gang some peace of mind. Once Nick and Billy leave, Victor Newman (Eric Braeden) has his chance to see Nikki and Victoria. He lets them know that he intends to make the ranch intruder pay for his part in all this.

Over with Kerry Johnson (Alice Hunter), she tells Jack that he sold her on the idea of ousting Phyllis Summers (Gina Tognoni). Kerry wants to pledge her loyalty to the company itself, not the person currently in charge. She agrees to look over the written offer and sign it if everything checks out. Later, a contact listed as “PC” calls Kerry on her cell phone.

Meanwhile, Arturo Rosales (Jason Canela) fills Abby Newman (Melissa Ordway) in on the anonymous donor news along with Rey’s suspicions about Summer Newman (Hunter King) being responsible. Once Devon Hamilton (Bryton James) walks over, he gets updates on the donor and is glad to hear it.

Arturo exits without mentioning Lola’s chef gig, so Devon realizes Abby hasn’t revealed their search for a replacement. Abby still hopes Lola will recover quickly and can take the job as planned. Devon isn’t sure how long he can wait. He warns the deal may be off if they can’t work something out fast.

Jack’s love life is getting complicated. 💔 What do you think Kerry’s plan is? #YR pic.twitter.com/4bzuHcaJ50

Afterward, Ana Hamilton (Loren Lott) pesters Devon about listening to her songs and getting a check to her ASAP. She’s eager to make more money, so Devon scolds her about the debt she’s accumulated. He hopes Ana won’t dig herself a hole this big again.

Devon gets a shock later when he runs a credit check and finds out Ana isn’t in debt at all. He confronts her with this new info and wonders if she’s fallen into a bad habit. Devon presents drugs or gambling as options, but Ana leaves in a huff.

Abby meets back up with Arturo and is surprised by Kyle Abbott’s (Michael Mealor) proposal to Summer. Arturo notes that Summer may have demanded marriage in exchange for the liver donor surgery. Abby tracks down Nick next and delivers the “Skyle” engagement shocker. She wants Nick to get to the bottom of all this while he still can, so he calls out for Summer at home.

The engagement drama has to wait when Nick learns the verdict is in. Abby and Billy also receive word while Victor tells Nikki and Victoria it’s time. “The Young and the Restless” spoilers say that long-awaited moment is almost here! We’ll keep you posted as other Y&R details and rumors emerge. Stay tuned to see what’s next in Genoa City.