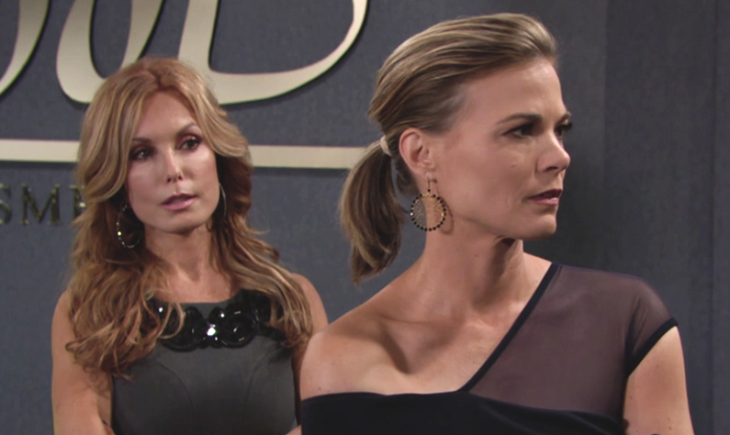 The Young and the Restless spoilers tease that trouble is brewing for Lauren Baldwin (Tracey E. Bregman). At Jabot board meetings, Lauren is always there, fighting for Fenmore’s. She’s naturally very protective of her family’s company, and she’s been very wary of the various CEO changes at Jabot in recent months.

Lauren was particularly happy when Phyllis Summers (Gina Tognoni) was Jabot’s CEO. The two women had a good professional relationship, and Phyllis made sure to look out for Fenmore’s. But Phyllis’ tenure as CEO was short, and she was ousted after it came out that Kerry Johnson aka Dominique Carroll (Alice Hunter) was a plant for Ashley Abbott (Eileen Davidson).

But now Phyllis has a new business venture going – an online accessories company. She’s hired Mia Rosales (Noemi Gonzalez) to help her get things going, and since Phyllis usually lands on her feet, the company will likely be a success. But according to Y&R spoilers, Lauren may not be so thrilled with the direction that Phyllis’ company takes.

Young And The Restless Spoilers – Problems With Jack Abbott

Of course, Fenmore’s sells accessories, too, so Phyllis will probably wind up being a direct and aggressive competitor of Lauren’s. That could cause some tension between the friends going forward. Phyllis was pretty tight-lipped about her venture when Lauren started asking questions about it, so Phyllis probably knows that Lauren won’t be too happy with her business plan.

The Young and the Restless spoilers also indicate that Lauren will start having problems with Jack Abbott (Peter Bergman) as well. Ever since Jack became CEO of Jabot, Lauren has been on him about maintaining the good relationship between Jabot and Fenmore’s.

It seems that Lauren wants Fenmore’s to benefit from the whole “Jabot Collective” concept in some way, and she’s been anxious to talk to Jack about it. But it doesn’t look like she’s going to like Jack’s overall vision for Jabot and how it impacts Fenmore’s bottom line.

Y&R spoilers say that Lauren and Jack are going to clash in the boardroom, so look for some big-time Jabot vs. Fenmore’s battles going forward. Interestingly, Y&R spoilers also indicate that Lauren and Jack may nevertheless connect on a more personal level, as Jack faces the difficult decision of whether to put his mother, Dina Mergeron (Marla Adams) in a memory care facility.

Young And The Restless Spoilers & Recap Thursday, May 2: Kyle And Lola Make Love – Jack Opens Up To Lauren – Victor On A Mission https://t.co/Qk3P8Z1Vie pic.twitter.com/TUCuyhGjNG

At any rate, it will be interesting to watch Lauren fight the good fight to protect Fenmore’s and keep it thriving amidst competition from Phyllis and from Jack’s big plans for Jabot. Do you think Lauren will be able to keep Fenmore’s on track?

Bold And The Beautiful Spoilers: Hope Is Stunned When Thomas Kisses Her