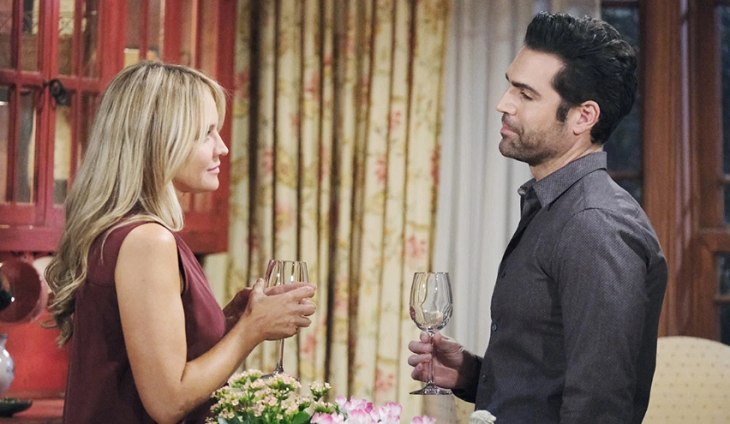 The Young and the Restless spoilers tease that Sharon Newman (Sharon Case) and Rey Rosales (Jordi Vilasuso) are fully green-lighted to form Shey. Y&R’s new super-couple bided their time, behaved morally, and have earned their chance at building a lasting relationship, which is just beginning.

Private detective Rey plays what longtime television enthusiasts might dub a good Baretta, Barnaby Jones, Cannon, Columbo, Mannix, or any one of a number of other 1960’s and 1970’s type sleuths.

Y&R fans recall Shadam’s famous jaunts and what they resulted in. So it appears possible that an enhanced storyline will have Sharon and Rey written into the Adam Newman (Mark Grossman) comeback storyline. That would make sense, considering Sharon’s history with Adam (as then played by Michael Muhney) and where Case’s character is now.

What better way to forge a deeper bond between Shey than to have Sharon and Rey mixed into an epic adventure? The theme was telegraphed earlier this year when both characters were stranded at a hotel miles outside of Genoa City. This adventure signals to fans that yes, these characters have actually been paired and will begin creating memorable moments.

Shick fans were teased in 2014 and 2018. But their hopes were dashed both times as Nick (Joshua Morrow) first booted Sharon from his life five years ago. Sharon followed that up last fall by telling Nick to get lost.

While Y&R has re-paired many other former couples through to remarriage, it’s become obvious that showrunners believe a Shick reboot wouldn’t provide compelling views. All GC devotees should therefore rightfully be expecting Shey to meet, or exceed chemistry and arc expectations within coming months.

News that Noemi Gonzalez (Mia Rosales) was leaving the cast, coupled with Arturo Rosales’ (Jason Canela) very likely fatherhood status winked hard at Rey’s full break from Ria. With the first love of Rey’s life gone, Sharon moves to number one. He has not other known love links, which leaves him fully open.

In recent years, Sharon ended her brief romance with Scott Grainger, Junior (Daniel Hall). This was shortly after having lost Dylan McAvoy (Steve Burton), who went into witness protection. Y&R’s promotion of Vilasuso as a leading man means that Rey is probably more than Sharon’s next guy. He’s her new soul mate and maybe, husband.