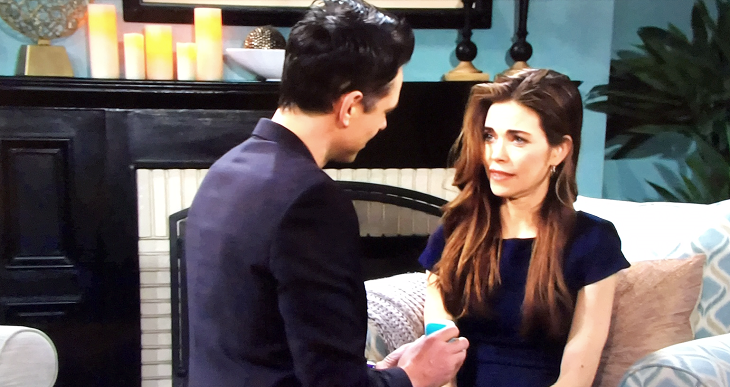 “The Young and the Restless” (YR) recap for Wednesday, April 17, 2019 reveals that Summer Newman (Hunter King) enters Phyllis Summers’ (Gina Tognoni) suite furious that she tried to break up her and Kyle Abbott (Michael Mealor). She’s tried to figure out why her mother would be willing to wreck her marriage over a business deal then realized she never forgave her for sleeping with Billy Abbott (Jason Thompson) – it’s payback. Phyllis protests that Billy took advantage of her.

Summer says Billy didn’t force her into anything – it was her choice, knowing it would hurt her. She’s ashamed and doesn’t know how Phyllis can look at her. Phyllis comforts her. Summer impresses upon her mother how much she wants her marriage to work.

Phyllis doesn’t think Kyle is being honest with her. Summer knows he’s not over Lola Rosales (Sasha Calle) and if this is a mistake it’s hers to make. She advises Phyllis to focus on her own life – it’s a mess.

Billy Abbott, Katie and Johnny greet Victoria Newman (Amelia Heinle) at home. The kids go off and Billy produces two glasses of wine. Victoria asks what’s going on. Billy wants her to relax and enjoy herself – he’s taken care of dinner. Victoria starts to tell him about Victor Newman (Eric Braeden) in Vegas before apologizing – she’ll try to relax.

Young And The Restless News: Christian Le Blanc Talks About What’s Next For Michael And The Baldwin Family

After dinner, Billy’s encouraged to hear Victoria laugh and they have dessert with the kids. Later, Billy declares this is how it should be every night for the rest of their lives, produces a ring, and on one knee, asks Victoria to marry him. Before she can answer, Phyllis Summers starts pounding on the door and hollering, “Billy! I know you’re in there!”

At Top of the Tower, Y&R’s Cane Ashby (Daniel Goddard) tells the twins their mother is being released tomorrow. They’re thrilled. Cane relays he couldn’t sign the divorce papers and plans to prove himself to Lily Ashby (Christel Khalil). Charlie Ashby (Noah Alexande and Mattie Ashby (Lexie Stevenson) exchange a look. Cane reveals he’s downsizing his life – Chancellor takes up too much of his time – he’s going to resign then do something to give back.

The twins, exasperated, warn against doing this to impress Lily. Mattie angrily asks him to accept that Lily doesn’t love him anymore and let her go. She stalks off and Charlie advises Cane if he’s in denial it’s best not to find out the hard way. Cane can’t give up.

At Crimson Lights, Tessa Porter (Cait Fairbanks) is glad Mariah Copeland (Camryn Grimes) was able to convince Sharon McAvoy (Sharon Case) to close early as she needs feedback on her music. Mariah promises to be completely honest. Tessa plays her song and Mariah declares, “It was so beautiful.” They embrace as Mariah raves about her pouring her soul into her music. They’re expressing their love over a romantic dinner when someone throws a brick through the window. The note says ‘Give up the gossip, you’re ruining people’s lives.’

In the Abbott living room, Y&R’s Dina Mergeron (Marla Adams) calls Jack Abbott’s (Peter Bergman) ‘lifestyle’ idea for Jabot nonsense. Jack argues he’s saving the company but Dina snaps that he has failed his father. Jack yells that she’s the one who walked out on him and three kids. He sneers about her discussing Dad’s vision like she had any interest in it. Dina becomes emotional and exits.

After, Jack finds Traci Abbott (Beth Maitland) at her laptop and they discuss her starting a new novel. Traci heard him and Dina earlier. Jack reveals she was lucid, even called him Jack, but he lost her again by reactingwhen she got under his skin. He realizes he’s kept so much bottled up and has resented their mother for years. Traci understands he’s dissatisfied, and his heart is breaking.

Jack marvels that Dina can’t understand what she did to his life and stalks off. “I’m fine.” Once alone, Traci flashes to her last conversation with Cane, then begins writing about a man trying to win back his one true love. Time passes. Cane appears outside the door. Traci senses a presence, and walks over, but he’s gone.

At Jabot, Y&R’s Jack peruses the vision boards for the new collective. Suddenly, a young Dina Mergeron, (played by Cathy Marks), appears to him – Traci Abbott told her he needed to talk. Jack unloads about how he needed her growing up, while John Abbott made excuses for her. He recalls John telling him to let it go, but he never did and he got so angry about her abandoning them and it affected every part of his life.

‘Young And The Restless’ Spoilers: Summer Won’t Back Down As Lola Fights For Kyle https://t.co/nlBVfjt1Yy pic.twitter.com/jdsSzX2hMX

Jack asks what only Dina can tell him, “Why?” Young Dina explains she was deeply unhappy, and concedes she was selfish and nothing she can say will take away the pain; the real question is what Jack wants at this time in his life – does he want to keep putting John’s dream first? Jack cries at the rage he’s felt toward her. Dina asks again, “What do you want?” Suddenly, Jack snaps out of it and looks thoughtful. And that’s a wrap. Don’t forget to check often with Soap Opera Spy for all your latest soap needs!