‘Young And The Restless’ Spoilers & Recap Thursday, April 25: Loved Ones Gather To Celebrate The Life Of Neil Winters 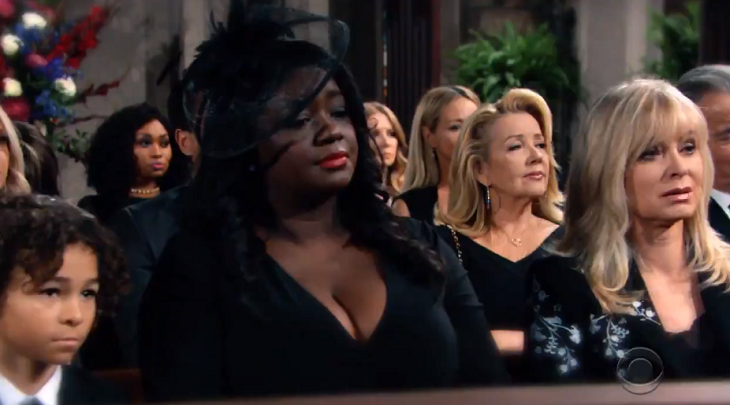 “Young and the Restless” (YR) recap for Thursday, April 25, 2019, reveals that amazing Grace plays as Lily Ashby (Christel Khalil) looks at the flowers and cards that have come to her house and cries. Cane Ashby (Daniel Goddard) holds her as Charlie Ashby (Noah Alexander) and Mattie Ashby (Lexie Stevenson) join them. All are dressed for Neil Winters (Kristoff St. John) memorial.

At the Abbott mansion, Jack Abbott (Peter Bergman) sees Ashley Abbott (Eileen Davidson) out the door before stopping to look at his sobriety chip.

At the church, Devon Hamilton hugs Lily Ashby, who then goes into Malcolm’s arms. Ana Hamilton (Loren Lott) sings as everyone takes their seats in the pews. Devon stands in the doorway and cries. The service begins with the reverend speaking about Neil Winters and the sense of abandonment and confusion that comes with sudden death. He says Neil made Genoa City a better place. 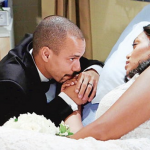 Lily gets up to speak, but breaks down and can’t do it. Malcolm steps up. He brushes his fingers across Neil’s portrait then says it’s hard (his voice catches)…to do something that shouldn’t need to be done. Malcolm reflects that it was times like this his brother was at his best – if he was standing there right now, he’d be giving a profound speech.

Malcolm collects his emotions than in a shaky voice, with a laugh, recalls Neil’s corny jokes. Malcolm doesn’t have his brother’s words – he was oil to his water. He recalls their difficult relationship and Neil talking sense into him when he needed it.

Malcolm says Neil was always there and he should have listened to him more than he did. He wishes he could tell him, “You helped me become the man that I am.” He cries that he misses him and loves him. “I pray to God that he knew.”

Nate Hastings speaks and shares words from his mother, Olivia, who reminds them ‘just as we feel their loss, we should feel their love’. Victor Newman (Eric Braeden) stands next to and struggles to contain his emotions as he recalls Neil joining him at Newman Enterprises as a young man. He reflects on his honesty and integrity and says he became a friend and member of the family.

Victor watched him build his own business and raise his family with pride. Tears spill down as Victor intones that Neil was one of the few men he trusted…he was a good man. “I shall miss you, my friend.” Next, Jack speaks of Neil’s generosity – the Abbott-Winters Foundation was his idea and the work was personal for him. He talks of the emails they’ve had since Neil’s death and says he saved lives…one of those lives was his.

Devon takes the podium and talks about Neil as a father. He was also the best friend he ever had. He recalls Neil didn’t like him at first, but he never quit on him, and never gave up – it meant everything in the world. He took lived by loyalty, respect, righteousness, and more than anything love. Devon doesn’t carry Neil’s DNA but his voice in his head right now saying, “My man…” Lily sobs. Devon continues, “Carry on.”

He knows that voice will always be there. Lily still can’t go up, so Malcolm prompts Cane to do it. Lily agrees. Cane Ashby talks about his regret in letting down Neil and Lily more than once, but says Neil believed in second chances and was the first father figure he saw in action – he showed him what a father and child’s relationship should be like. He speaks of Neil’s strength after losing Dru – he passed that spirit onto Lily.

With encouragement, Lily comes to the podium. She cries that she was so excited for the rest of her life to start, and now it has to without him. Lily’s lost both parents and feels so alone, though she knows that’s not true. She’s scared she’ll feel this way forever. Taking a deep breath, Lily cries that he should have had more time on this earth…to laugh.

She recalls his laugh, his strength and how he knew how to pick up the pieces and pull you back together. Nikki Newman (Melody Thomas Scott) sobs. Lily says they all have to be there for each other now to honor him. She steps to the casket and says, “I love you.” The Reverend returns and explains there is grief in memories, but joy as well. He advises cherishing Neil’s memories and each other as well.

Devon thanks everyone for coming and for loving their dad. Leslie approaches to say Neil was the best man she ever knew. Phyllis Summers hugs Malcolm – she’ll pay him to move back to town. She lets him know she’ll always be there for him. Traci Abbott (Beth Maitland) tells Lily she’ll ache and feel alone, but she’s there for her, and implores her to lean on Cane if she needs to.

Devon urges Sofia Dupre (Julia Pace Mitchell) to reach out whenever she or Moses need anything. Sofia says, “There’s so much of Neil in you.” Sofia then hugs Malcolm. Finally, Lily and Devon hold hands and together, look at the portrait of Neil. And that’s a wrap. Don’t forget to check often with Soap Opera Spy for all your soap needs!