“The Young and Restless” (YR) recap for Monday, May 20, 2019 reveals that over at Sharon Newman’s (Sharon Case) house, she hears a gunshot and yells, “Adam!”

At the tackhouse, Adam Newman (Mark Grossman) falls to the floor after being shot. Sharon Newman arrives, tells Adam not to try to talk, then calls for help before imploring him to please hang on.

In her suite, Y&R’s Phyllis Summers (Gina Tognoni) types on her laptop about a June launch, then Summer Newman (Hunter King) arrives. Phyllis closes the laptop. Summer hates the tension between them and hates that Jack Abbott (Peter Bergman) is planning an accessory line – how can she make it up to her? Phyllis says, “Come and work with me.” They debate.

Summer feels manipulated and Phyllis insists she’ll never be properly recognized at Jabot – even Ashley Abbott (Eileen Davidson) couldn’t make it work. Summer thinks Phyllis’ obsession with revenge on the Abbotts is unhealthy. Phyllis hollers about them firing her when they all did far worse. Phyllis tells Summer she ruined her plans by ratting her out to Jack, but later, she launches her website. 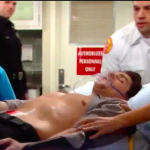 In another suite, Billy Abbott (Jason Thompson) and Victoria Newman (Ameila Heinle) finish having sex and breathlessly express how much they’ve missed each other. Victoria has to go to work before Victor Newman (Eric Braeden) gives Adam her office. Billy doubts he’ll stick around. Vikki asks, “If he does?” Billy warns, “Don’t trust him.”

At Crimson Lights, Y&R’s Mia Rosales (Noemi Gonzalez) and Arturo Rosales (Jason Canela) tell Lola Rosales (Sasha Calle) and Rey Rosales (Jordi Vilasuso) they’ve come to say goodbye. Mia thanks them for not sending her to jail, and they don’t want to part on bad terms.

Rey is standoffish and Lola takes him aside to ask him to be the bigger man for Arturo. Rey tells Arturo all he ever wanted was for him to be happy – both of them. They want that for him too. Rey pulls Arturo into a man hug. After, Lola hugs Arturo and warns Mia not to pull crap on her brother. She wants constant baby updates. Lola cries as they leave.

Adam Newman’s wheeled into the hospital and Paul Williams (Doug Davidson) approaches Sharon Newman and marvels that it’s true; Adam’s alive. Sharon wants it to stay that way. Victor Newman appears and Sharon updates him. Victor pleads for his son not to die, as he’s taken to surgery.

At Y&R’s Nick Newman’s (Joshua Morrow) place, he gets a text from Victor Newman to call – it’s urgent. In the Club suite, Victoria Newman gets an urgent message from Victor. Billy Abbott leaves, and Victoria calls her father and learns Adam Newman was shot.

At the hospital, Victor Newman wonders who did this to his son. Sharon Newman answers Paul Williams’ questions about the scene and is taken aback when he’s skeptical of her account. Victor asks Paul to stop interrogating Sharon, and she thanks him. Nick Newman and Victoria Newman arrive.

Victor gets irritated and looks sad when Nick snarks about the upheaval Adam Newman’s caused. Nick advises Sharon to walk away from Adam just as Nate Hastings (Sean Dominic) appears and updates them – Adam will be fine. Victor will wait until he awakens.

Jack Abbott reels, and wants to see him. Billy Abbott scoffs that he’s claiming to have amnesia. Jack and Billy argue their different viewpoints on Adam Newman. After, Kyle Abbott complains to Jack about demoting him – he thought he’d move Summer Newman.

Young And The Restless Spoilers – Kyle Abbott Is Angry

Jack says this will give him more time with Lola Rosales. Summer arrives and Kyle snarks that she got what she wanted – they’re no longer a team. He’s sorry for what he put her through, and she concedes he never lied about his feelings for Lola. Kyle’s certain she’ll find her person. Summer goes to Jack and warns him about Phyllis Summers’ mindset.

Y&R’s Paul Williams and the detective investigate at the tackhouse. Paul feels their best chance at finding the shooter is Adam Newman – if he makes it. Paul locates the bag of cash – it wasn’t a robbery, Adam Newman was clearly the target.

At Sharon Newman’s place, Rey Rosales learns she’s concerned about Adam Newman and who shot him. Rey wishes he were still on the force. He tells Sharon he filed for divorce and is ready for a new chapter…with her.

At the coffeehouse, Y&R’s Victoria Newman and Nick Newman discuss giving Adam Newman another chance. Billy Abbott arrives and is  not surprised to hear Adam Newman was shot. Nick asks if there’s any chance he put the bullet in Adam.

Victoria sighs that Billy was with her. Billy asks if Nick has an alibi. He was with Christian. Victoria considers giving Adam another chance, but Billy warns it’s only going to get worse. Inside, Lola Rosales texts Kyle Abbott for emotional support after Arturo Rosales and Mia Rosales have left. He’s already there and holds her.

In Adam Newman’s hospital room, Victor Newman chokes up telling his son he’s a fighting Newman. He’s happy he’s home and vows to keep him safe. Adam comes to, opens his eyes, and says, “Dad?” And that’s a wrap. Don’t forget to check often with Soap Opera Spy for all your soap needs!