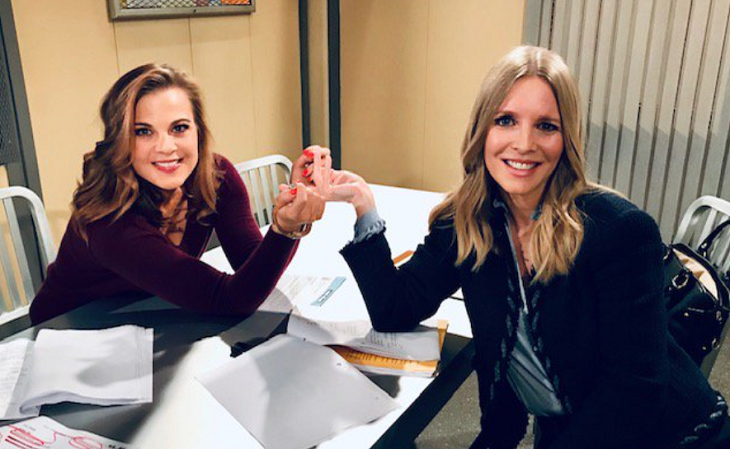 The Cover-up Crew’s situation has gone from bad to worse on “The Young and the Restless.” Nikki (Melody Thomas Scott) is sitting in jail while the remaining three have been placed under arrest and are being questioned about JT’s death. As the authorities try to figure out what really happened, it would seem that one of the ladies is ready to talk.

Spoilers reveal that Phyllis (Gina Tognoni) asks for Christine (Lauralee Bell), not to deny her involvement or ask for her immediate release, but to cut a deal in return for details on JT’s (Chad Luckinbill) death. What can Christine offer Phyllis that would make her spill every last detail? Whatever it is, Phyllis is ready to make a move to save herself while the other ladies go down.

Young And The Restless Spoilers Nikki Receives Some Bad News

Meanwhile, Nikki Newman receives news from Michael (Christian Le Blanc) that her daughter Victoria (Amelia Heinle) was arrested. She insists that Vikki is innocent and should be released right away. Nikki admits to everything and claims that she acted alone. Rey tells Nikki that even though she may be the killer, Victoria, Sharon (Sharon Case) and Phyllis can still go down with her.

Nobody does it like Nikki Newman! Congratulations to @MelodyThomasSco on her 40th anniversary with The Young and the Restless. 🎉 Don’t miss her special tribute episode this Wednesday on #YR! pic.twitter.com/Hkyxi3AyU2

Rey (Jordi Vilasuso) interrogates Vikki but she still firmly maintains her innocence and that of her parents. The inconsistencies in the answers of Nikki and Vikki convince Michael that someone is lying.

On the other hand, Sharon feels hurt over Rey’s actions. He insists that he still loves her but he needs to do his job and that it is making things more difficult. The validity of Sharon’s confession is questioned after Brittany Hodges (Lauren Woodland), Sharon’s lawyer, finds out about Rey’s manipulations. She also discovers that Rey looked at some documents without Sharon’s consent. Later on, Brittany informs Rey that her client is recanting her story and will no longer answer any questions.

Meanwhile, Arturo (Jason Canela) appears in the precinct, bearing bad news. Rey tries to make him leave but Arturo stops him on his tracks when he reveals that something terrible has happened to Lola (Sasha Calle). She was rushed to the hospital after she was found unconscious in the pool. Good thing Kyle Abbott (Michael Mealor) was there to pull her out of the water and call for her. She’s currently in the hospital but is still unconscious. Dr. Nate Hastings (Brooks Darnell) says Lola still has brain function but is uncertain if she will recover.

Bold and the Beautiful Rumors: Tragedy Will Strike Before Zoe Can Reveal The Truth About Beth

Days Of Our Lives Spoilers: Jennifer Struggles To Cover The Mayoral Race As Jack Turn His Back On His Ideals