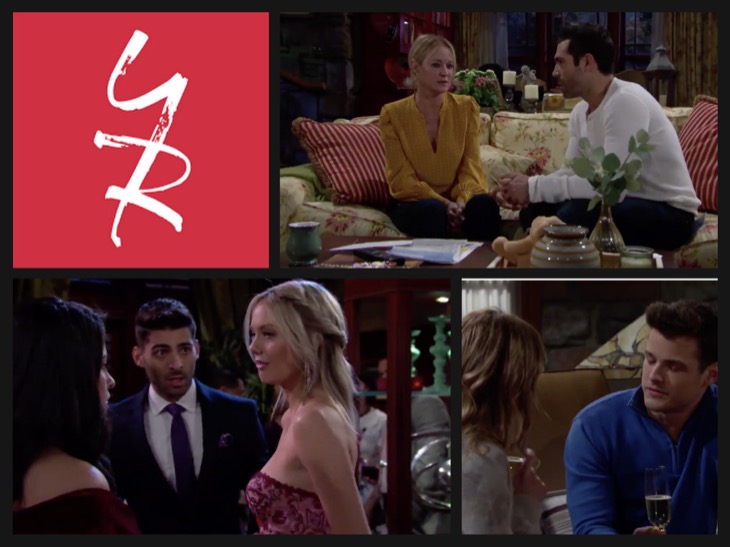 There was toil and trouble for The Coven this week when High Priestess Nikki Newman (Melody Thomas Scott) confessed to the murder of J.T. Halstrom (Chad Luckinbill). Coven members have been hiding in plain sight since the events of April 13, 2018, when Nikki hit J.T. on the head with a fireplace poker and Victoria (Amelia Heinle), Phyllis (Gina Tognoni) and Sharon (Sharon Case) helped her cover it up and bury the body in Chancellor Park.

Nikki’s confession sure threw a wrench in the works for the women, especially Phyllis, who has been busy throwing eye of newt and toe of the frog into her bubbling cauldron, while cursing Victor to life in prison.

All it took for Sharon to admit she was involved in J.T.’s murder was for Rey (Jordi Vilasuso) to express his feelings to her. If he’d told her he loved her months ago, viewers could have been saved from this excruciating, drawn-out storyline. But it looks like it’s finally coming to an end, as the remaining three Coven members were taken out of their homes in handcuffs on Friday.

Gloomy Future Ahead For The Ashby Royal Family

We were also treated to (or tortured by, depending on your opinion) a Valentine’s Day video about Queen Lily (Christel Khalil) and King Cane’s (Daniel Goddard) epic love story. It included lines like: “Though circumstances beyond their control are keeping them apart today, their love is as strong as ever and they count the tomorrow’s until they are reunited again.” Tears streamed down King Cane’s face as he watched it.

This video was crafted by Lily and Cane’s twins, Princess Mattie (Lexie Stevenson) and Prince Charlie (Noah Alexander Gerry). Now, I ask you, how many teenagers do you know of who would even want to hear a mention of their parent’s romantic life, much less create such a gag-worthy tribute to it?

Speaking of Queens, Genoa City’s resident Drama Queen Mia Rosales (Noemi Gonzalez) was causing trouble again this week, first calling out her brother-in-law Arturo’s (Jason Canela) name while she and husband Rey were making love and then participating in a Valentine’s Day brawl with Arturo’s fiancé Abby (Melissa Ordway) at the Athletic Club.

Lola’s Life In Danger – Will Kyle Make It Home In Time To Save Her?

And finally, many of us were not surprised when Kyle (Michael Mealor) finally succumbed to Summer’s (Hunter King) charms at the cabin this week, with Lola (Sasha Calle) watching them through the door.

But we’re not done with Kola just yet. Lola raced to the Abbott estate to try to salvage their relationship and when no one answered the front door, she went around back, looking for Kyle. As Lola sent him a text, someone wearing high-heeled boots kicked her in the back and she fell to the ground and hit her head. After she got up, she slipped and fell headfirst into the Abbott swimming pool.

Will Kyle arrive in time to pull her out of the water? And who could have done such a thing? Summer comes to mind immediately, but could it have been a drunken, raging Mia, mistaking Lola for Abby because Lola was wearing Abby’s jacket with the hood up?