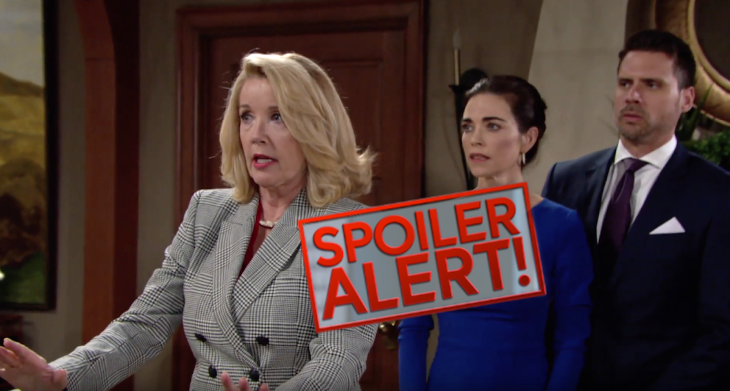 “Young and the Restless” spoilers for Monday, February 11, tease that Nikki Newman (Melody Thomas Scott) will ignore Victor Newman’s (Eric Braeden) protests. At the ranch, Nikki insists that she can’t stand by and watch Victor go down for a crime he didn’t commit. She urges Christine Williams (Lauralee Bell) and Rey Rosales (Jordi Vilasuso) to believe she killed J.T. Hellstrom (Thad Luckinbill).

Rey and Christine aren’t sure if Nikki’s telling the truth or not, but they obviously have to follow up on this and ask questions. Victor remains on house arrest while Nikki heads to the police station. Rey wants the whole story, so Nikki bends the truth with her alternate version of events. She claims she followed J.T. to Chancellor Park and took a fireplace poker with her to protect herself.

Nikki adds that J.T. was hurling deadly threats and tried to attack her, so she fought back with the poker and accidentally killed him. Since a hole was nearby, Nikki contends that she shoved J.T. in it and buried him. Rey expresses doubt and wonders why Nikki didn’t just call the cops regarding J.T.’s threats. Nikki explains that by suggesting that logic doesn’t come into play when you’re protecting your kids.

Michael Baldwin (Christian LeBlanc) fumes about being blindsided about all this, but he does his best to help. After Nick Newman (Joshua Morrow) and Victoria Newman (Amelia Heinle) show up, Rey notes that he needs to get a statement from Victoria. He wants to grill her and see if her story matches up with Nikki’s.

Victoria insists that Nikki is just making everything up in an attempt to save Victor. She makes it clear that she doesn’t think Victor is guilty either since he was in the hospital the night J.T. disappeared. Rey counters that they have no way of knowing the exact day of J.T.’s death. He certainly doesn’t rule anything out here.

When Rey asks about the fireplace upstairs, Victoria argues that it hasn’t been used in forever. Later, Rey returns to Michael and Nikki. He intends to find proof that other people were involved in J.T.’s death. At the Abbott mansion, Kyle Abbott (Michael Mealor) tells Jack Abbott (Peter Bergman) that his relationship may be over. Jack doesn’t think Kyle should throw in the towel yet, so he offers some suggestions.

Valentine’s Day would be a great opportunity to get on Lola Rosales’ (Sasha Calle) good side again. Kyle warns that Lola doesn’t like expensive gifts or plans, so Jack suggests a trip to the Abbott cabin. Of course, that presents a problem as well. Kyle points out that Lola is a virgin and he doesn’t want to make it seem like he’s pressuring her.

Jack describes some romantic possibilities, including dinner, hanging lights and a sleigh ride. Kyle decides that might work, so he has an invitation made for Lola and plans to meet up with her. After getting lectured by Ana Hamilton (Loren Lott), Fenmore “Fen” Baldwin (Zach Tinker) worries to Summer Newman (Hunter King) about his career. He really blew it by missing his shot at the showcase.

Summer and Fen establish that they were using each other to spark jealousy for Kyle and Lola. Once they’ve cleared that up, Summer does her best to help Fen. After Devon Hamilton (Bryton James) arrives, Summer claims she was in crisis mode the night of the showcase. She insists Fen came to her aid, so Devon takes that into consideration.

Ana also pushes Devon to give Fen another chance, so he does. However, Devon warns Fen that he’d better now blow this one! Next, Lola spots Summer touching Kyle’s hand and rejects his cabin invitation. Kyle’s frustrated with Lola for not making time for him, but she thinks he doesn’t understand her restaurant goals. Lola contends that maybe they should just part ways and be done with it.

Summer snatches up Kyle’s invitation and gazes at it soon after. “The Young and the Restless” spoilers say the wheels will start turning, so don’t miss Summer’s big move. We’ll give you updates as other Y&R news and rumors emerge. Stay tuned to see what’s next in Genoa City.