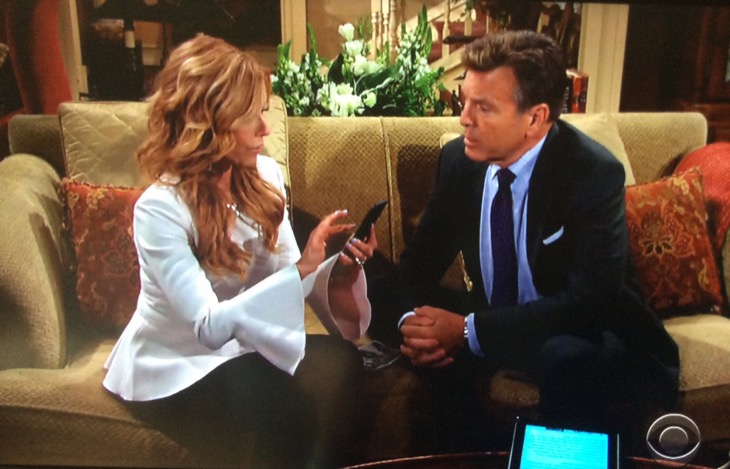 “Young and the Restless” (Y&R) spoilers tease that Jack Abbott (Peter Bergman) wants to take Jabot in a different direction. While Jack just took over the CEO spot again, the Abbotts want Jack to find a way to save the company from, what seems to be a definite failure. Here’s what’s ahead on Y&R.

Summer and Kyle talk about how to promote their ideas on social media. Everyone is impressed with Summer’s ideas and consider bringing her on as a consultant.

Billy thinks he knows someone that they need to talk to about this plan. he calls Rebekah Barlow (Jennifer Taylor), asking if she can come to Genoa City to talk business.

After Phyllis Abbott (Gina Tognoni) lost her CEOP spot, Lauren Fenmore (Tracey E Bregman) couldn’t help but feel like her time with Jabot might be over. She knows that she needed their help before, but she wonders if she can do it alone now.
Meanwhile, while Rebekah is in town, she runs into Nick Newman (Joshua Morrow). He asks her for drinks and they hook up. Rebekah was shocked to learn that he is no longer with Phyllis or anyone for that matter. They really hit it off.

Y&R Spoilers suggest they may fall for each other

The truth is the fans would love to see Nick with someone new. This going back to ex-lovers is getting kind of old.

It looks like trouble is ahead with Lauren and Jabot. She is starting to want to have control over her company and want to cut Jabot out. Also, it looks like the Y&R writers are selling Summer and Kyle as a creative team, too. It will be interesting to see how all this develops.