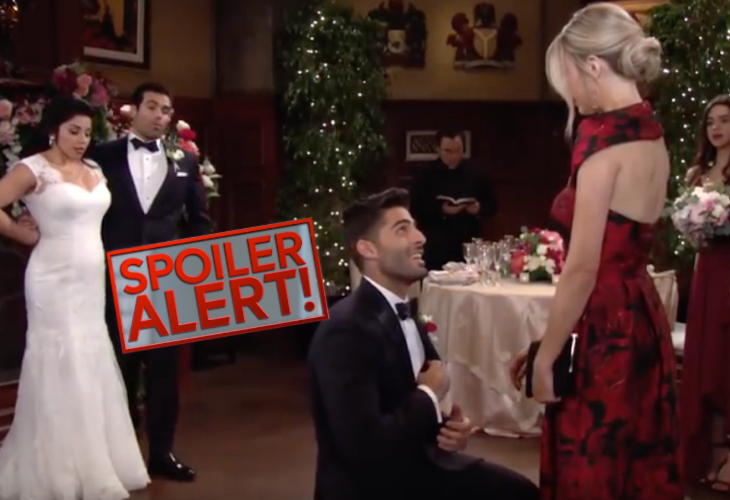 “Young and the Restless” spoilers for Friday, January 25, tease that Arturo Rosales (Jason Canela) will await Abby Newman’s (Melissa Ordway) answer. He just popped the question, so it’s time for Abby to make her choice. At the athletic club, Abby moves past the shock of it all and agrees enthusiastically. Mia Rosales (Noemi Gonzalez) is clearly irked that the spotlight was taken away.

Kyle jokes about Abby becoming a bridezilla and suggests a double wedding today. Abby contends that she has to have her whole family around, so they’re going to set a later date. Once Mia gets the party back on track, she gets a necklace as a gift from Rey Rosales (Jordi Vilasuso). After watching Abby and Arturo make out, Mia struts over and insists that Arturo needs to make his toast as Rey’s best man.

Phyllis faces Nick’s tirade about her lies, but she insists she was honoring the pact they made. She adds that if it weren’t for her, Nikki Newman (Melody Thomas Scott) and Victoria Newman (Amelia Heinle) could’ve gone down for murder. Phyllis praises herself for stepping up when they needed her, but Nick brings up the fireplace poker. Since Phyllis kept it, he doesn’t buy this hero act she’s putting on.

Nick thinks Phyllis may have framed Victor Newman (Eric Braeden) as well, but Phyllis shuts down his accusations. They bicker as Nick marvels at how easy it is for Phyllis to lie. Phyllis eventually snaps that she’s not the only one. She blabs about Sharon Newman (Sharon Case) blasting Nick for his secrets when she was keeping the truth about J.T. Hellstrom (Thad Luckinbill) under wraps.

Over with Cane Ashby (Daniel Goddard), he faces more backlash. Neil Winters (Kristoff St. John) cuts Cane out of a trip to see Lily Ashby (Christel Khalil), so this hubby isn’t happy. Lily told Neil about his make-out sessions with Victoria, so Cane gets called out on his terrible behavior. He ultimately leaves in a huff.

Later, Devon Hamilton (Bryton James) learns Billy Abbott (Jason Thompson) visited Lily to squeal. Cane returns and demands to see his wife, but Neil and Devon chew him out. Despite Cane’s pleas, Neil maintains that Lily’s going to be calling the shots when it comes to her family.

Meanwhile, Jack Abbott (Peter Bergman) talks to Kyle about Kerry Johnson’s (Alice Hunter) secretive nature. He’s been catching her in lies and he’s not OK with that. Jack considers giving up, but Kyle suggests he should hear Kerry’s side of the story first. There’s no point in throwing this romance away until Jack gets some answers.

Jack demands the truth from Kerry later, but her story’s rather flimsy. Kerry claims she was embarrassed about her parking tickets, so she didn’t tell Jack about her day in traffic court. Jack acts relieved that Kerry isn’t perfect, but he seems uneasy as he exits.

#YR Here’s Kerry with a syringe. Tomorrow she gives Jack a new scent just for him called “Jack of Hearts” and that’s in a vial. But, here are some rumors why she has a vial:
She is trans.
She has a drug problem.
She has a disease.
And a million others! Lol. pic.twitter.com/V6AFV3WkKH

Of course, “The Young and the Restless” fans know Kerry was actually on her way to meet someone when she was supposed to be at the lab. Who was Kerry meeting and why? We’ll give you updates as other Y&R news and rumors emerge. Stay tuned to see what’s next in Genoa City.