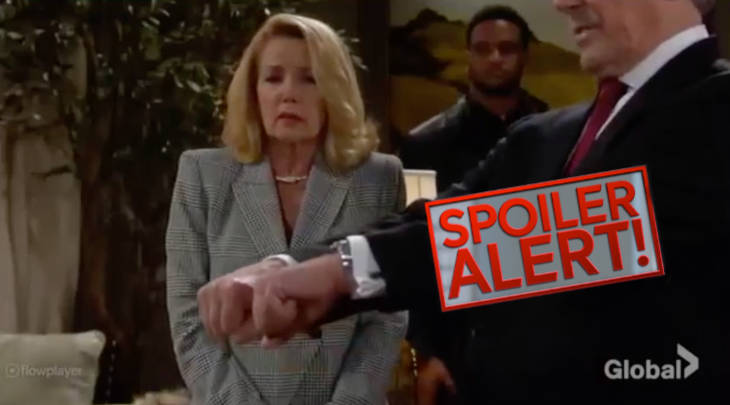 Nikki’s fretting since she blames herself for Victor’s predicament. Victor offers reassurance and reminds Nikki that she protected Victoria. Now he feels like it’s his turn to do the protecting. Over with Sharon Newman (Sharon Case) and Mariah Copeland (Camryn Grimes), they debate the situation. Sharon battles guilt about Victor going down for this, but Mariah warns her mom not to do anything risky like coming clean.

At Nick Newman’s (Joshua Morrow) place, he talks to Phyllis Summers (Gina Tognoni) about the recording and what Victor’s up against. Nick suggests that the person who set Victor up is hurting Nikki, too. He knows it’ll be hard for her to watch Victor face consequences for this. Phyllis grows concerned about Nick getting caught in the chaos, but they eventually turn their attention to a crucial meeting.

Victoria arrives and spars with Phyllis briefly. Sharon shows up with Mariah next, so Mariah takes her turn with Phyllis as well. However, Sharon wants to discuss a plan to help Victor and put this nightmare behind them. She feels like three eyewitness accounts of what happened would be enough to gain sympathy with any jury. Sharon doesn’t think Nikki would pay the price if they came forward.

Phyllis and Mariah argue that the risk is too high, which leads Nick to agree. With Nikki’s health at stake, Nick just isn’t willing to approve this plan. At Rey Rosales’ (Jordi Vilasuso) apartment, he talks to Mia Rosales (Noemi Gonzalez) about his part in Victor’s upcoming escort to the courthouse. Christine Williams (Lauralee Bell) gets in touch and insists that she wants to be part of it, too.

The Young And The Restless Spoilers: Abby And Mia’s War Of Words, Trouble Is Brewing!#YRhttps://t.co/80vXUHnta2

Mia and Rey also discuss their relationship, which is back on track. She promises not to hurt Rey again, and he knows she won’t. Rey points out that if Mia made another massive mistake like before, their marriage couldn’t survive it. They would be over for good.

Over with Abby Newman (Melissa Ordway), she leans on Arturo Rosales (Jordi Vilasuso) for support and comes up with a distraction tactic. Abby thinks it’d be good to take the heat off Victor in the media. She wants people to concentrate on their upcoming nuptials instead, so she suggests some engagement photos. Arturo isn’t exactly thrilled, but he goes along with Abby’s plans.

Despite a quick Mia encounter, Abby stays focused on the task at hand. Later, Arturo agrees to go with Abby to the courthouse. Meanwhile, Rey and Christine walk in the ranch to get Victor. It’s time for Vic’s trial, so he’s placed in handcuffs as a worried Nikki looks on. She ultimately blurts out that there’s not going to be a trial today. Nikki declares that she has something to tell them, so a shocker’s brewing.

“The Young and the Restless” spoilers say next week will bring even more Y&R drama. We’ll give you updates as other details and rumors emerge. Stay tuned to see what’s next in Genoa City.