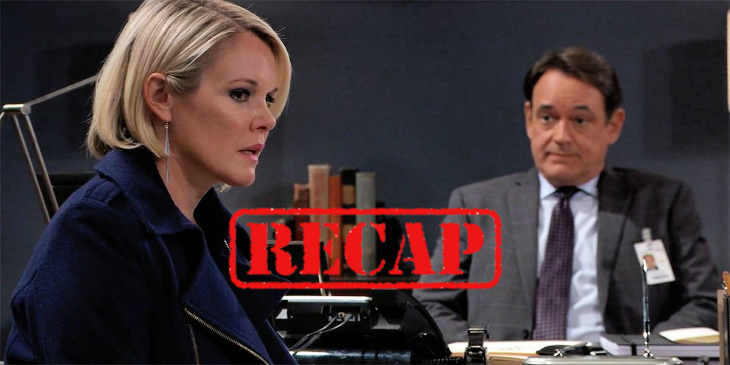 Sonny asks if she is on her way to prosecute Franco (Roger Howarth). Margaux can’t talk about the case; Sonny knows Lulu (Emme Rylan) identified Franco as her attacker. Margaux warns Sonny against tainting the evidence against Franco. Margaux tells Sonny to keep his hands clean, and he won’t have any trouble from her. Margaux says she has let it go and won’t be a prison of her past or his.

General Hospital’s Alexis (Nancy Lee Grahn) is meeting with Scott (Kin Shriner) about Gail’s (Susan Brown) will. Liz (Rebecca Herbst) is calling, and Alexis tells him to answer the phone. Liz tells Scott about Franco’s arrest. Scott jumps to Franco’s defense and begins to have files pulled to defend him. Sonny joins Alexis and asks if she saw the conversation with Margaux. Alexis asks why Sonny wanted to meet with him; he says Jason (Steve Burton) isn’t thrilled with Shiloh (Coby Ryan McLaughlin).

Alexis says she doesn’t meddle in her adult daughter’s lives; Sonny looks at her. Alexis asks how his mother would feel about his life choices. Alexis tells Sonny that she and Kristina (Lexi Ainsworth) are getting along better. Alexis tells Sonny she had a moment at one of the seminars. Sonny asks Alexis if it was about Julian. Alexis says she no longer has a relationship with Julian and tells him they need to stay out of each other’s personal lives. Sonny reads part of Shiloh’s book, the bartender sees it and tells Sonny it changed his life.

General Hospital’s Franco is in the interrogation room at the PCPD. Jordan (Briana Nicole Henry) comes in, Franco refuses to talk without his lawyer and threatens to sue them for false arrest. Scott shows up at the police station and demands to know where Franco is. Jordan tells Scott how bad things are, but he says Lulu isn’t a reliable witness. Margaux arrives and is annoyed that they can’t proceed with Franco yet. Scott questions Franco about what happened and his care there.

Franco tries to make sense of his situation with Scott. That's until things really go off the rails. #GH is brand-new and STARTS NOW on ABC! @kinshriner #GH55 pic.twitter.com/uSPGab3DKB

Jordan says they have no evidence so far. Margaux likes the odds of a guilty verdict. Jordan gets a message about more evidence. Jordan and Margaux come in and asks about Franco’s sessions with Ryan. According to his file, Franco has a blood list. The cops arrive with the license, and they tell Scott he wanted evidence and throw them on the table. Liz arrives, and Scott tells her they are charging Franco with the murders, she drops the picture on the floor.

GH Spoilers The License Are Found

General Hospital’s Liz goes to Franco’s art room, and the police are tearing it apart. Liz tells Chase (Josh Swickard) they better fix the art room before Franco sees it. Griffin (Matt Cohen) questions what is going on; Chase says Franco is under arrest and isn’t likely to be released. Liz tells Griffin that Lulu has to be confused, she knows Franco did not do this. Liz tells Griffin she has faith in Franco, Griffin doesn’t believe in faith. Liz tells Griffin he isn’t in any position to give her advice on faith.

Chase comes back, and Liz wants to know how much longer this will take. One of the cops finds the license in the drawer where Ryan (Jon Lindstrom) planted them. Liz and Griffin are cleaning up the art studio and find a sketch for their wedding invitation. Liz leaves while Griffin is still talking. Drew (Billy Miller) stops by to see Franco and Griffin tells him about his arrest.

General Hospital’s Ryan is in Kevin’s (Jon Lindstrom) office, and Ava (Maura West) wants to know why he didn’t tell her about the arrest. Ryan tells Ava the police have to protect the accused from people out to get revenge. Chase arrives at Kevin’s office and demands the file he needs for the PCPD. Ava demands to know if this is about the Kiki’s (ex-Hayley Erin) killer. Ryan says she will find out soon enough, they tell her about Franco’s arrest.

Ava wants to know what Ryan didn’t tell her about this last night. Ryan tells her Lulu made a statement last night after a session with him and she remembered who stabbed her. Ryan tells Ava he is licensed to do the therapy and was asked to help Lulu remember. Ava tells Ryan that Franco would not hurt Kiki. Ava tells Ryan that Franco is not capable of hurting someone he loved as much as Kiki. Ava asks Ryan if he witnessed Franco starting to unravel and kept quiet. Ava remembers Ryan saying he couldn’t see Franco anymore.

Ava demands answers from Ryan. Ava asks if Ryan was concerned that Franco would get violent again, he says yes. Ryan says he didn’t have enough evidence to give to the court yet. Ava demands to know why he didn’t make an anonymous report. Ava tells Ryan she’s not sure about anything right now. Ava starts to walk away, he grabs her arm and tells her not to walk away from him. Ava leaves and runs into Griffin in the hallway, Ryan comes out and sees them hugging.

General Hospital’ Terri (Cassandra James) has an update on Oscar’s (Garren Stitt) case. Terri tells them the tumor has stopped growing for the moment. Drew and Kim (Tamara Braun) hug Oscar, and he leaves to meet Jocelyn (Eden McCoy). Oscar tells them to finish up with Terri. Terri says they will continue to monitor things, the tumor didn’t grow, but it also didn’t shrink, and Oscar’s prognosis remains the same.

Terri tells Drew and Kim to make some lasting memories but that Oscar will get worse and they need to have a plan in place how to handle it when he does. Kim tells Drew that any reprieve is good, but they have to make plans for the end. Kim says she should have figured out a strategy to help Oscar by now, but she hasn’t. Drew says they will figure it out together.

General Hospital’s Jocelyn is at Charlie’s for breakfast. Julian questions why they can’t have breakfast at Kelly’s. Jocelyn tells Julian that Oscar likes the food there. Julian says he regrets letting her run his life but doesn’t tell her he and Kim are back together. Julian gives Jocelyn her food, and she complains because he forgot her strawberries.

Julian tells Jocelyn that Drew and Kim will always be Oscar’s family, but he and Kim are back together. Oscar arrives and tells Jocelyn the tumor has stopped growing and he has a reprieve for now. Oscar asks Jocelyn what she and Julian were talking about, she tells him she asked Julian to stay away from Kim so his parents could get closer. Jocelyn says it lasted for about five minutes, but Kim and Julian are back together. Oscar tells Jocelyn to let his parents do what they are going to do without their help; his parents should get to live their lives too. Kim stops by to give Julian the news, Alexis is upset when she sees Kim in Julian’s arms.