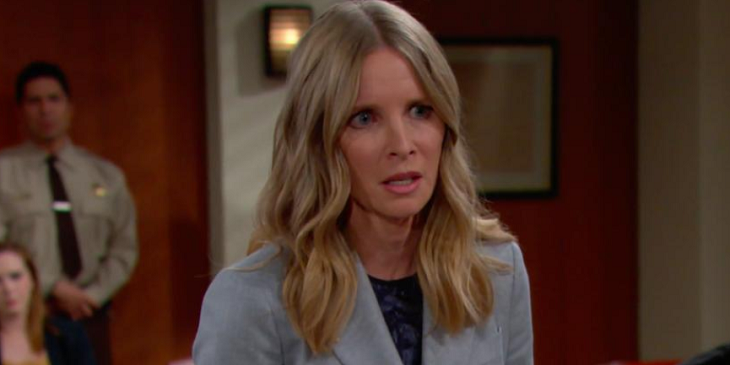 The Young and the Restless (Y&R) spoilers tease that Christine Williams (Lauralee Bell) will question Detective Rey Rosales’ (Jordi Vilasuso) motives with Sharon Newman (Sharon Case) after the verdict comes in. She will suggest that he used his position to get Sharon to talk. Is it possible the handsome young cop will lose his job? Here’s what you need to know about what’s ahead on Y&R.

The fact is that Rey did use his position to manipulate Sharon to tell him the truth about that night that J.T. Hellstrom (Thad Luckinbill) supposedly died. Y&R spoilers point out that Sharon never wanted to be part of the cover-up crew, but she felt bad for Victoria Newman (Amelia Heinle).

Nikki (Melody Thomas Scott) put Sharon in a terrible spot. She wanted to tell what she knew, but she couldn’t. It is an unspoken rule in the Newman family that they stick together. And, Sharon knew that if she rolled over on them, Nick Newman (Joshua Morrow) would be furious with her.

Young And The Restless Did Rey Use Sharon For Her Confession?

So, Y&R spoilers say she did what she had to and kept quiet. The secret was a hard one to keep. As the courts will point out, her crime was trusting the Newmans and keeping their secret.

The burning question seems to be is, did Rey use Sharon to get information on the case? At first glance, the answer seems to be no, but that may not be completely true.

Did Rey have genuine feelings for Sharon? Of course, he did. Did he know she had information on the case? He wasn’t aware of it before that night.

However, once he put it all together, he did use her affection for him to get her to tell him everything she knew. In that sense, he used his relationship and trust with her to get a confession. And, in Christine’s mind, that is wrong and could cost Rey his job.

While Rey’s job is secure right now, in the near future Christine or even Paul Williams (Doug Davidson) could fire the young cop and send him back to Miami. Don’t forget to come back later for more The Young and the Restless (Y&R) spoilers, news, and casting updates!

Days Of Our Lives Spoilers: Leo Offers His Services To Stefan – What Is He Up To?