Young And The Restless Spoilers: Cane Moves On With Traci – Closes The Door On Lane Reunion? 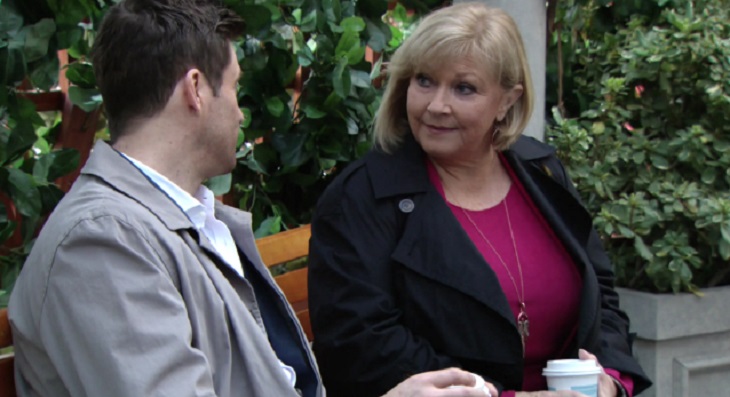 The Young and the Restless (Y&R) spoilers tease that Cane Ashby (Daniel Goddard) is getting closer to Traci Abbott (Beth Maitland). After his marriage ended with Lily Ashby (Christel Khalil), he never thought he would be able to move on. But he did. And, he has to admit that he’s much happier than he’s been in a long time.

Lily wants nothing to do with Cane anymore. She feels that there has been too much drama between them and it’s time for them to break up. And, she’s not wrong.

While Cane’s kiss with Victoria Newman (Amelia Heinle) was innocent, for Lily, it told a bigger story. In a time that Lily was struggling in prison, Cane was in a lip lock with he the woman that fired him from his job at Brash & Sassy. This was someone, Cane claimed he hated.

Lily was released from prison early for good behavior. Just before she came home, Y&R spoilers state that she accepted a job teaching inmates inside the facility. And, she asked Cane for a divorce. She wanted a fresh start, which meant she wanted a clean break from Cane.

At first, Cane struggled with this, but over time, she accepted it. As Cane began to accept her decision, he grew closer to Traci. At first, it was only friendship, but as time passed, it seems to be more than friends. They have gone on several dates now.

Cane had the idea after Traci finished her book to throw her a book wrapping party. Y&R spoilers tease that Traci wasn’t sure about it at first, but quickly liked the idea. At her party, the spoilers suggest that Cane will make a grand gesture that will reveal his true feelings for Traci.

Young And The Restless Spoilers – Does Cane Feel The Same About Traci?

It’s clear that Traci has feelings for Cane as she seems like she is head of heels in love with him. But how does Cane feel about her? Is he falling for her too? These are questions that the Y&R spoilers say we will find out the answer during the week of July 8.

The Young and the Restless Spoilers Tuesday, July 9: Summer Lashes Out at Chelsea – Jack Suspicious of Victor – Paul Gets Autopsy Info #yr #youngandrestlesshttps://t.co/T3SwiVTZfv

Bold and the Beautiful Spoilers: Steffy And Liam’s Hook-up Drives Hope To The Altar With Thomas