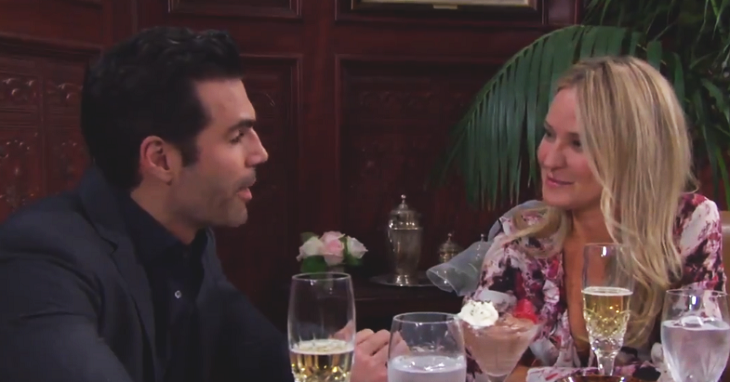 April has arrived on the Young and the Restless and with it plenty of couple’s drama awaits. Let’s preview what devoted Y&R viewers will see.

Victoria Newman (Amelia Heinle) has been through an emotional wringer. The long-awaited J.T. Hellstrom (Thad Luckinbill) reveal seemed to indicate that she would finally be recoupling with Billy  Abbott (Jason Thompson).

But an unexpected jaunt to Las Vegas, Nevada, leads to a meeting with a new character named Brandon (Mitch Eakins), which spells trouble for Villy reunion hopes.

Young And The Restless Spoilers – Shey Is On, Which Means Shick Is Not

Sharon Newman (Sharon Case) and Rey Rosles (Jordi Vilasuso) sidelined any thoughts they had about getting together since last summer. Detective Rosales’ arrival happened because Vilasuso was about to supplant Doug Davidson (Paul) as Genoa City’s lead law enforcement officer. Thankfully, Davidson has returned and separately, positive developments are now greenlighted with Shey.

It does seem that Y&R is allowing Sharon and Rey to move toward couple’s status, which also means that Shick revival plans never existed, or were dashed. For whatever reason, Sharon and Nick Newman (Joshua Morrow) seem destined to remain apart.

Cane Ashby (Daniel Goddard) made an impulse mistake. Well, actually, he and the aforementioned Vickie made a number of them when they romantically bonded earlier this year on various occasions by kissing. Billy felt compelled to tell Lily Ashby (Christel Khalil), who naturally was devastated.

The receipt of his wife’s divorce documents spurns Cane to make amends. Thankfully Lane appears to be saved. It’s reasonable to speculate that Y&R may have adjusted plans in this regard, as a series of special episodes focusing on Neil (Kristoff St. John) will be seen later this month. Family unity will rule those days, thus making a healed Lane fitting.

Young and the Restless #YR Poll: Are You Shocked By Michelle Stafford's Return? @celebratesoaps https://t.co/los4Xx02v2

Along with the above, Jack Abbott (Peter Bergman) is losing another love. With Kerry Johnson’s (Alice Hunter) tie to Ashley Abbott (Eileen Davidson) exposed, Jerry is over just as this nice couple was getting started.