Young and the Restless Recap Wednesday, January 30: Victoria and Victor Discuss JT Abuse, Wishes She Came To Him 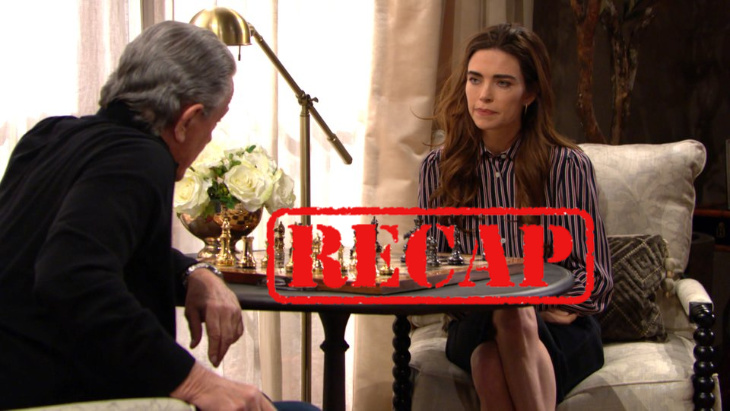 “Young and the Restless” (YR) recap for Wednesday, January 30, 2019 reveals that over at Crimson Lights, Kyle Abbott (Michael Mealor) teases Lola Rosales (Sasha Calle) about how busy she’s been. She apologizes but keeps agonizing about restaurant decisions since it opens in three weeks. Kyle urges her to delegate and let him take her to dinner. Lola’s uncertain. Nearby, Ana Hamilton (Loren Lott) and Fenmore Baldwin (Zach Tinder) are writing a song.

Everyone looks to the door as Summer Newman (Hunter King) walks in. She greets Fenmore, who says she looks amazing. She counters he sounds amazing. Lola asks Kyle if he knew she was back. He did, but assures her she’ll be back in Dubai soon. Meanwhile, Summer convinces Fenmore to go out that night and celebrate his success, to Ana’s chagrin. Summer joins Lola and Kyle and reaffirms she’s respecting his boundaries. After, Kyle explains Summer asked him to dinner, and he said no. Lola’s pleased and agrees to join him later.

At the ranch, Katie wants to go play with her ‘friend’. She runs off and Victoria Newman (Amelia Heinle) has bad news for her father – during an interview, the reporter asked about J.T. Hellstrom (Thad Luckinbill) and the charges against Victor Newman (Eric Braeden) and she lost it. Victor’s proud of her fighting back. They discuss J.T.’s abuse. Victor can’t understand why she didn’t come to him. Victoria was ashamed.

Victor will ALWAYS be there for his family. ♥️ #YR pic.twitter.com/D9X4c1S9qS

She recalls finding J.T. in her bedroom that night and Nikki Newman (Melody Thomas Scott) saving her. Victor knows he was in the hospital then, but could have helped them. He’s there for her now. They embrace. In the upstairs hall, Katie plays hide ‘n’ seek. Downstairs, Victor is proud of Victoria’s strength, and Victoria credits him with making her the person she is. They finish talking business and go to find Katie. They find her after a time, and someone watches and listens on the video spy cam as they ask her questions.

Who do you think this could be? #YR pic.twitter.com/UN6EfCh8kb

Over at the Abbott mansion, Kerry Johnson (Alice Hunter) arrives and tells Jack Abbott (Peter Bergman) she’s not ready to walk away from the idea of having children but doesn’t want to walk away from him either. Jack feels it’s a monumental decision and he may not want to do it again. Kerry clarifies it’s about her future, not his. For them right now, it’s a non-issue. Jack wouldn’t like to rob her of something she wants. Kerry just wants the option and thinks maybe he’d change his mind. Jack says no – he can’t promise that. Kerry leaves.

Ana Hamilton slams into the penthouse and Devon Hamilton (Bryton James) asks what’s bothering her. She rants about Fenmore Baldwin being so distracted and going to the clubs with bottle service Barbie. Devon trusts her instincts and wonders if Fenmore should be on the label.

Ana thinks he deserves another chance. Devon muses that she’s the one with the real talent and Fenmore should value her. He suggests they wake Fen up – Ana should start recording again. Devon talks up her singing talent. Ana doesn’t want to be back in the spotlight, and the song he heard her singing is hers and no one can hear it.

At the Athletic Club, Kyle Abbott realizes Lola Rosales is unable to get her mind off the restaurant but is understanding. They’re kissing when Fenmore Baldwin and Summer Newman arrive laughing. Kyle offers to go elsewhere, but Lola insists she’s unbothered. At the bar, Fenmore marvels at being on a date with Summer and all that’s changed. Fenmore brings up his past crush, but she doesn’t want to talk about it and kisses him as Kyle and Lola look on, amazed at the make-out session.

Looks like this date is going well! #YR pic.twitter.com/7usN2NOeG2

Lola paints Kyle a picture of her vision for future restaurants. He wonders if she ever sees herself enjoying dining out instead of working. She gets it. Meanwhile, Fenmore offers Summer to get a room. She’s up for fun, but looks over at Kyle and decides to go say goodnight first. Summer updates Kyle and Lola she’s staying in town, then rejoins Fenmore and pleads a headache. He realizes she’s been trying to make Kyle jealous and mutters some things never change. At their table, Kyle and Lola had a great time despite the one ‘inconvenience’. They kiss.

At Jabot, Kerry Johnson is upset. She’s surprised to see Jack Abbott appear. He didn’t like how they left things and has decided she’s right and they have to live in the now and see where the relationship takes them. Kerry’s 100% on board. They kiss.

MUST WATCH General Hospital Preview Video Thursday January 31: Julian Warns Ava She Could Lose Avery If She Goes To Far