Young and the Restless Recap Monday, February 11: Rey Vows To Prove Nikki Did Not Kill JT 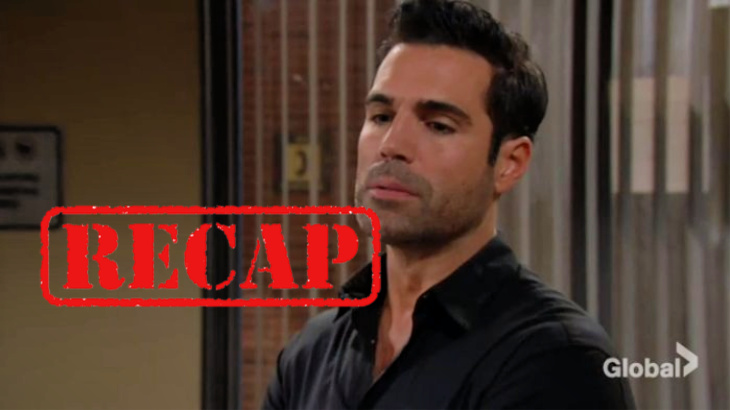 “Young and the Restless” (YR) recap for Monday, February 11, 2019, reveals that over at the ranch, Nikki Newman (Melody Thomas Scott) assures Christine Williams (Lauralee Bell) she’s not trying to stall. She can’t stand by and watch her husband be punished for something he didn’t do. Victor Newman (Eric Braeden) warns, “Nikki don’t do this!” Rey Rosales (Jordi Vilasuso) and Nick Newman (Joshua Morrow) chime in too, but Nikki protests.

She blurts, “My husband did not kill J.T. (Thad Luckinbill)! I did!” Michael Baldwin (Christian LeBlanc) cautions Nikki to stop talking, but she tells Rey, “You suspected me from the beginning.” Victor insists this changes nothing. Christine and Rey step out to discuss whether Nikki could be telling the truth. Meanwhile, Michael orders the Newmans to keep their mouths shut. Christine rejoins them and declares Victor will continue on house arrest and Nikki will be brought in for questioning. Rey reads her MIRANDA rights. After Nikki and Michael are gone. Nick surmises that Nikki’s winging it.

At the Abbott mansion, Jack Abbott (Peter Bergman) learns something’s bothering Kyle Abbott (Michael Mealor). Kyle makes a plan who says he thinks it’s over between him and Lola Rosales (Sasha Calle). They discuss her passion for her career and he says it makes Kyle want to be around her all the time. Jack suggests he romance her for Valentine’s Day. Kyle warns spending money’s not the way to impress her.

Jack has an idea and suggests the Abbott cabin. Kyle would have to convince her it’s not about seduction. Jack learns she’s a virgin and it’s what they fought about. He suggests he string up lights, plan a simple dinner, and he’ll have a horse-drawn sleigh waiting. Kyle’s impressed and says he’ll make an invitation too. He arranges to meet Lola at Crimson Lights.

Fenmore Baldwin (Zach Tinder) arrives at the penthouse apologizing to Ana Hamilton (Loren Lott), who advises it’s not up to her if he gets another chance. Ana hollers at him for blowing off his own showcase and an opportunity hardly any singers get. Fenmore concedes it all happened fast and went to his head. He’s willing to work hard and pleads with her to talk to Devon Hamilton (Bryton James).

At Crimson Lights, Fenmore Baldwin tells Summer Newman (Hunter King) how he messed up and made Devon Hamilton look stupid. Fenmore feels like an idiot because he wants this bad. They confess they were using each other to make Lola Rosales and Kyle Abbott jealous. Summer thinks she can make it up to him. She approaches Devon as he enters with Ana Hamilton and claims Fenmore was supporting her through a crisis. Ana pulls Devon aside. Fenmore tells Summer that was incredible and he hopes it works.

Fenmore updates Summer. After, Devon tells Fenmore that Ana went to bat for him, so they’ll give him one last chance and he’ll go on the road and work hard. Fen vows he won’t blow it. After Devon and Ana leave, Summer spots Kyle and joins him. Kyle’s meeting Lola, but she’s running late. He complains it must be work. Summer admires her determination and brings up the sex thing. She questions if Lola’s giving as much as he is and touches his hand. Lola appears.

Kyle presents her with an invitation to the Abbott cabin. Lola can’t take a few days off so close to her opening and says it’s like he doesn’t understand. Kyle argues you have to make time for someone you care about. She can’t. Kyle asks, “Can’t or won’t.” Lola suggests they go their separate ways. Summer approaches him, but he says, “Not now, Summer.” Summer picks up the discarded invitation.

At the police station, Michael Baldwin warns Nikki Newman she doesn’t have to say anything, but Nikki tells Rey Rosales what happened that night at Victoria Newman’s (Amelia Heinle) house, except she claims J.T. Hellstrom left through the window and she followed him later, taking the fireplace poker with her for protection. She lies that she confronted J.T. in Chancellor Park where he threatened to kill Victor Newman and take them all out.

She hit him when he lunged at her and realizing he was dead, she rolled him into the hole and buried him. After a break, Rey questions Nikki not coming to the police about J.T.’s threats. Nikki argues parents protect their children and logic doesn’t come into it. Nick Newman and Victoria arrive. Christine won’t let them see Nikki. As Michael hisses at them about being blindsided, Rey appears and wants to question Victoria to corroborate Nikki’s story.

Victoria insists her mother is lying to protect her father, who couldn’t have killed J.T. since he was hospitalized. Rey points out no one knows when J.T. actually died. He asks if she has a fireplace in her bedroom and when she last used it. Victoria says it’s been ages. Rey says that’s it for now. Later, Michael urges Nikki to be honest with him. Rey joins them and vows to prove she didn’t kill J.T. alone.

At the ranch, Nick Newman and Victoria Newman update Victor Newman. Victoria worries it’s all starting to unravel. And that’s a wrap. Don’t forget to check often with Soap Opera Spy for all your soap needs!

MUST WATCH General Hospital Preview Video Tuesday, February 12: Drew Stands Up For Franco, Tells Jordan HE IS NOT GUILTY