Young and the Restless Poll: What Is Right For Dina? – Abbott Family Confronts True Quality of Life – Vote Now! 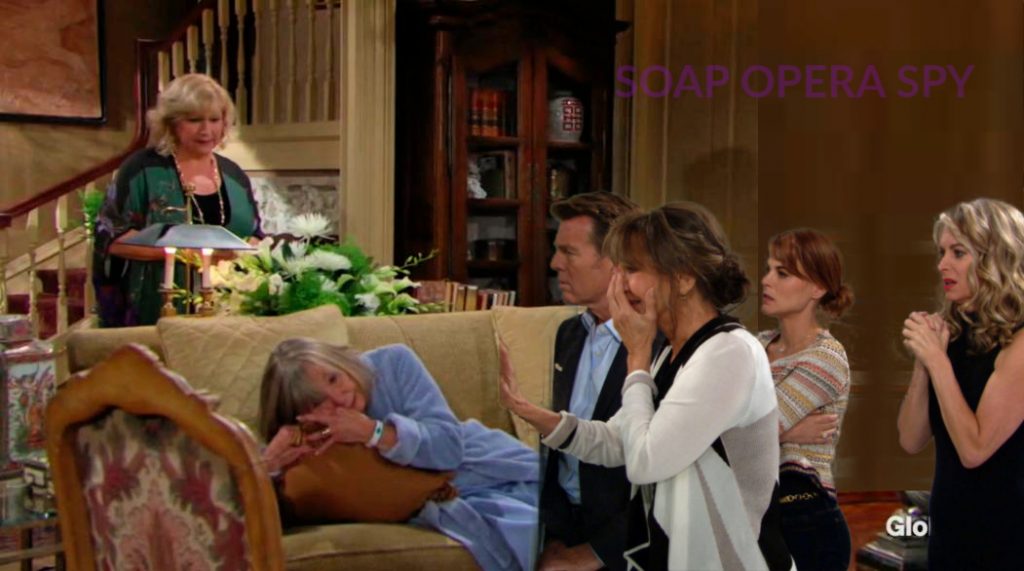 For many, on ‘The Young and the Restless’, life is about others. For some, life is about themselves. Such is subjectively true in the real world as well. And so Y&R’s realism arc involving Dina Mergeron (Marla Adams) continues to unfold.

As viewers recall, Dina and Graham Bloodworth (Max Shippee) were great pals. They arrived together from Paris, France, in 2017.

At the time the Abbott family was unsure what Graham’s true connection was to their mother. If he wasn’t her son, might he be her latest romantic connection? He turned out to be something else entirely.

Graham cared about Dina, to a certain degree, but he was most concerned with her total net worth. He, along with Dina, learned of her Alzheimer’s diagnosis long before it was revealed to Jack Abbott (Peter Bergman), Ashley Abbott (Eileen Davidson), and Traci Abbott (Beth Maitland).

Dina didn’t want people to pity her and so Al remained her hidden, growing tormentor. Eventually, Graham attempted to take Dina’s life by injecting her with a toxin. He falsely fronted quality of life issues with his aim actually being reaping the full windfall from her death.

But Dina fought off his attempted injection, which resulted in Graham unintentionally injecting himself. Madame Mergeron had Graham taken off life support shortly thereafter and he died.

Al has nearly overtaken Dina’s faculties more than a year later. Oh, she has some good days. Yet those fleeting moments no longer fool Jack, who didn’t want his mother put away last year when Ashley suggested various professional facilities, including a memory care center that was close to home.

Sure, the Abbott’s have enough money to keep Dina holed up in the Abbott mansion. They could hire a stream of nurses to monitor her twenty-four-seven. Doing so would make them feel better. But would that be what’s subjectively best?

An alternative would be to revisit the recent past and have each sibling, along with Dina’s grandchildren, make a collective decision that allows her to live, as best as is humanly possible, in a location where skilled professionals take care of the Abbott family’s matriarch.

The balance between logic and emotions helps to define what it means to be human. In varied instances there is clear wrong and right.

Graham was wrong when he tried to kill Dina so he could get her estate. No reasonable mind questions that, or ever suggests that taking her life in the future would be emotionally, or logically okay. Instead, a legitimate choice involves the type of care she deserves to receive.

It’s obvious that Dina’s condition has significantly progressed. So, what is the right choice the Abbott family can make now?

Fans of ‘The Young and the Restless’ rightfully express their opinions on a regular basis. So, what is right for Dina? Please vote in our poll below!

Bold and the Beautiful Spoilers: Hope Pushing Steffy To The Brink, Will She Take Liam Back?