Rebekah Barlow (Jennifer Taylor) is back in Genoa City for some business meetings, and probably a bit of a romance. “The Young and the Restless” spoilers reveal that Barlow will meet Nick Newman (Joshua Morrow) again.

Rebekah is in town to have meet with the Abbotts. She arrives at Jack Abbott’s (Peter Bergman) office with Billy Abbott (Jason Thompson) and introduces herself. Kyle Abbott (Michael Mealor) was also there, and Rebekah complimented everyone for their idea of a social media influencer campaign.

Later at Crimson Lights, Rebekah commented that Kyle and Summer Newman (Hunter King) have great chemistry, Y&R spoilers teased. Unfortunately (or fortunately?), the two are divorcing, and Kyle is back with Lola Rosales (Sasha Calle). 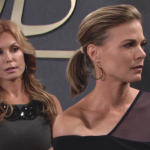 Young And The Restless Spoilers – Playboy Side Is Hiding

Nick arrives and Rebekah invites him to join them. After they wrapped up their business meeting, Rebekah asks Nick to give her a ride. Rebekah kisses him, but it became apparent his playboy side is hiding somewhere.

That’s a new side of Nick, having too worried for romance. Rebekah tells him he does not seem someone who’s ready for some casual hookups or who likes to be single. Unfortunately, Rebekah says she is not looking for anything serious right now.

“The Young and the Restless” spoilers tease that Nick and Rebekah will agree to be friends for now. Rebekah kisses him again and leaves.

Rebekah first appeared on “The Young and the Restless” as a powerful business woman in December 2018 to meeting some people who wants her to invest in their business. Phyllis Summers (Gina Tognoni) and Billy wanted her to partner with Jabot and the Jabotiques, and used Nick as a bait.

Rebekah thought Nick was interested in her, but she was disappointed that it was business that he wanted. Will Nick and Rebekah meet again and perhaps get a shot at romance for real?

Jennifer Taylor may appear rarely on “The Young and the Restless,” but she is familiar to many because of her role as Chelsea on “Two and a Half Men.” She started with the film “Wild Things” in 1998 and appeared in other projects such as “Miami Sands,” “NCIS,” “Diagnosis Murder,” “Charmed,” and “Shameless.”

Days Of Our Lives Rumor: Is Xander’s Other Secret Partner Kristen DiMera?