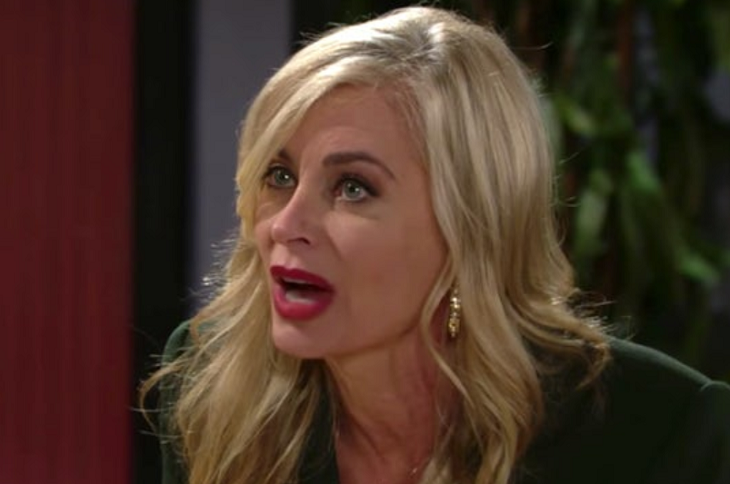 The Young and the Restless (Y&R) spoilers reveal fan favorite Eileen Davidson is returning, and fans of the CBS daytime drama couldn’t be happier.

Davidson is set to make a two-day return to the sudsy soap opera as she reprises the role of the youngest Abbott daughter, Ashley. She is set to be be on screen Thursday, March 28th and Friday, March 29th, and you will not want to miss it!

Eileen Davidson was last seen in Genoa City on October 29, 2018 when she caused quite the ruckus among her family members, by switching Jack Abbott’s (Peter Bergman) DNA sample, making it seem like he wasn’t John Abbott’s son.

She manipulated her frail mother, Dina Mergeron’s (Marla Adams) deteriorating memory and made it look like Jack was a product of an affair, just as she was. It was clear Ashley had the wits and determination, like her brothers Jack and Billy Abbott (Jason Thompson) and wanted the Jabot CEO seat at any cost; but she didn’t realize it would cost her everything to achieve that goal.

But things could be changing as it has come to light that Phyllis is one of the four women involved in the cover-up and death of J.T. Hellstrom (Thad Luckinbill). Could this be what brings Ashley back to town – her family feuding for the top spot again, or is there something less sinister that brings her back?

The Young and the Restless’ character of Ashley Abbott has been portrayed by Eileen Davidson from 1982 through 1988; although she is the one who originated the character, she is not the only actress to portray her. Brenda Eppeson played the role from 1988 until 1995, with Shari Shattuck taking over from 1996 through 1999.

This may only be a two day return for Eileen Davidson, but it doesn’t mean Y&R fans should give up hope in more brief stints or possibly even something more.

Be sure to tune into CBS’ The Young and the Restless (Y&R) to catch up on all the excitement happening right now. You will not want to miss out on Eileen Davidson’s return on March 28 -29! Check Soap Opera Spy often for updates, news, rumors and spoilers!