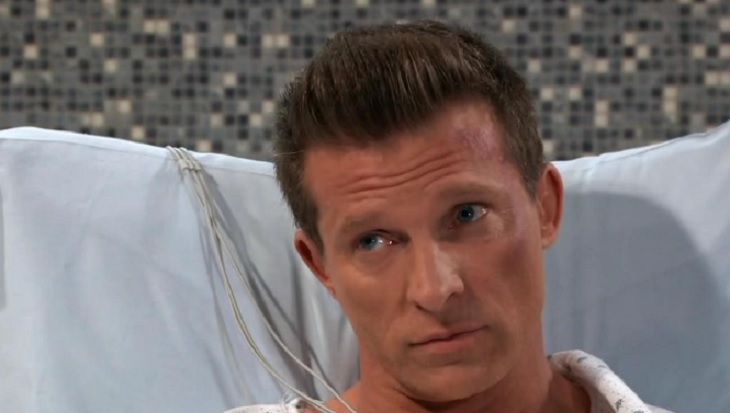 “General Hospital” spoilers for Tuesday, February 26, tease that Alexis Davis (Nancy Lee Grahn) will open up to Dr. Neil Byrne (Joe Flanigan). They’ll have another therapy session and try to dig a little deeper. Alexis will suggest that she’s dangerous, so Neil wonder why she thinks that’s true. He may disagree and argue that Alexis has simply dealt with a lot of dangerous people in her life.

While Neil offers solid advice, Jordan Ashford (Briana Nicole Henry) will still be in bad shape at GH. T.J. Ashford (Tajh Bellow) will arrive to hear the latest on Jordan’s status. Sadly, Jordan won’t be out of the woods yet. Curtis Ashford (Donnell Turner) and T.J. will lean on each other as they face this crisis.

Over in Jason Morgan’s (Steve Burton) room, “General Hospital” spoilers say he’ll get a slap and a lecture! When Sam McCall (Kelly Monaco) realizes Shiloh Archer (Coby Ryan McLaughlin) is standing there, she’ll quickly shift gears. Jason and Sam just got caught kissing, so the plan is certainly in jeopardy.

As a result, Sam will pretend to unleash her wrath on Jason. She’ll insist that she’s told him over and over that they’re done. It looks like Sam will put on quite a show for Shiloh’s benefit. She’ll tell Jason to accept that there’s nothing left between them and hope Shiloh falls for it.

It won’t be long until Kristina Corinthos-Davis (Lexi Ainsworth) shows up, too. She’ll approach someone at GH and ask if everything’s OK, so she may find herself stuck in all this Shiloh drama. Of course, Sam will keep working hard to keep Kristina safe. She’ll do whatever she can to save Kristina from Shiloh’s twisted web, but more trouble’s brewing.

In the meantime, somebody will secretly contact Drew Cain (Billy Miller). He’ll get a message that leaves him intrigued and possibly a bit confused. Next, Lulu Falconeri (Emme Rylan) will be all set for her interview with Franco Baldwin (Roger Howarth). He’ll plan to tell the fake story of how he killed his victims and ultimately attacked Lulu.

Franco won’t want to describe the phony and horrific details, but he’ll feel like he has no choice. This might be the only way to prove his innocence and catch Kiki’s real killer. Elsewhere, Ava Jerome (Maura West) will be on cloud nine. “Dr. Kevin Collins” aka Ryan Chamberlain (Jon Lindstrom) will give Ava an impressive engagement ring, so she’ll happily slip it on and prepare to spread the word.

“This situation is gonna kill me.” #GH55 pic.twitter.com/YRYlJN30QO