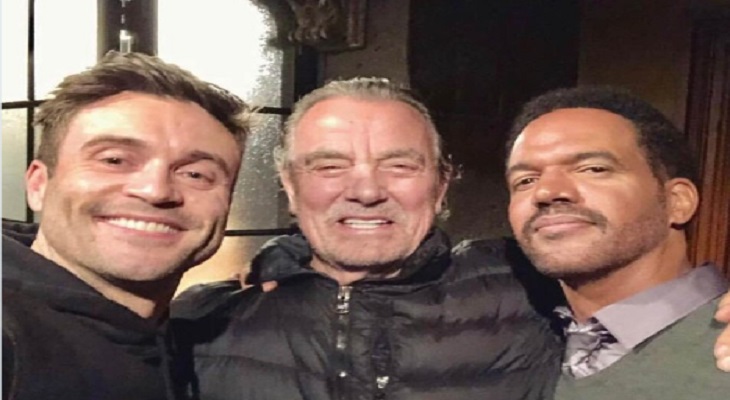 Tributes to The Young And The Restless’ (Y&R) star Kristoff St. John have come pouring in on social media after it was reported he died on Sunday at the age of 52.

Co-star Eric Braeden, who plays Victor Newman, posted a photo of himself with St. John and Daniel Goddard on Twitter with the caption: “My good friend and colleague, MY BROTHA, KRISTOFF ST.JOHN, passed away!! No words right now!!”

“RIP, my friend,” Sharon Case, who plays Sharon Newman on Y&R, posted this morning. Melody Thomas Scott, who plays Nikki Newman on the soap, thanked everyone for their condolences on the passing of her “dear friend”. “We all loved him so much,” she posted. “Brokenhearted.”Jason Canela, who plays Arturo Rosales, said that he was saddened by the terrible news and sent his prayers to St. John’s family.

Kristoff St. John was such a kind man and a very dear friend to me and so many at Y&R. My late husband Ron and Kristoff just adored each other too. He will be missed terribly. pic.twitter.com/9tQOpoRiNx

“Got to share some pretty good laughs with him this past year while working on Y&R and that’s how I’ll choose to remember him, with a smile on his face. Rest in Peace brother.”  Cameron Grimes, who plays Y&R’s Mariah Copeland, simply stated: “Our hearts are broken because his was the biggest.”

My good friend and colleague, MY BROTHA, KRISTOFF ST.JOHN , passed away!! No words right now!! pic.twitter.com/um3RVtQYPh

“My heart is with the family and loved ones of Kristoff St. John,” Alice Hunter, who plays Kerry Johnson, posted. “Sending you strength and healing. May he be met with the comforting arms of his beloved son and may their gentle souls rest together for eternity.”

Former Y&R co-star and current Days Of Our Lives actor Greg Rikaart posted: “RIP, beautiful Kristoff.”“No!!! This news has truly broken my heart. Kristoff was pure & so kind,” Community and The Odd Couple actor Yvette Nicole Brown tweeted. “I will never forget how wonderful he was to me and everyone else he came into contact with. He was just a good, good man.”

So unbelievably heartbroken by the passing of my dear friend Kristoff St.John. I loved him so much! He was such a wonderful man! @kristoffstjohn1 I hope you are dancing with the angels… https://t.co/e7bOVTNAB2

St. John’s last social media post on Twitter was January 21. He retweeted a tweet about losing a child. “Grieving the loss of a child is a process. It begins on the day your child passes and ends the day the parent joins them.”He leaves behind two daughters Paris, with ex-wife Mia St. John, and Lola, with ex-wife Allana Nadal.

Kristoff St. John was one of the kindest most generous men I’ve ever known. I pray he’s found the peace he was seeking. R.I.P. This sweet prince was loved and he will be missed. #RIP @kristoffstjohn1 #KristoffStJohn pic.twitter.com/F9SSfx4cW1

No!!! This news has truly broken my heart. Kristoff was pure & so kind. I will never forget how wonderful he was to me and everyone else he came into contact with. He was just a good, good man. 💔