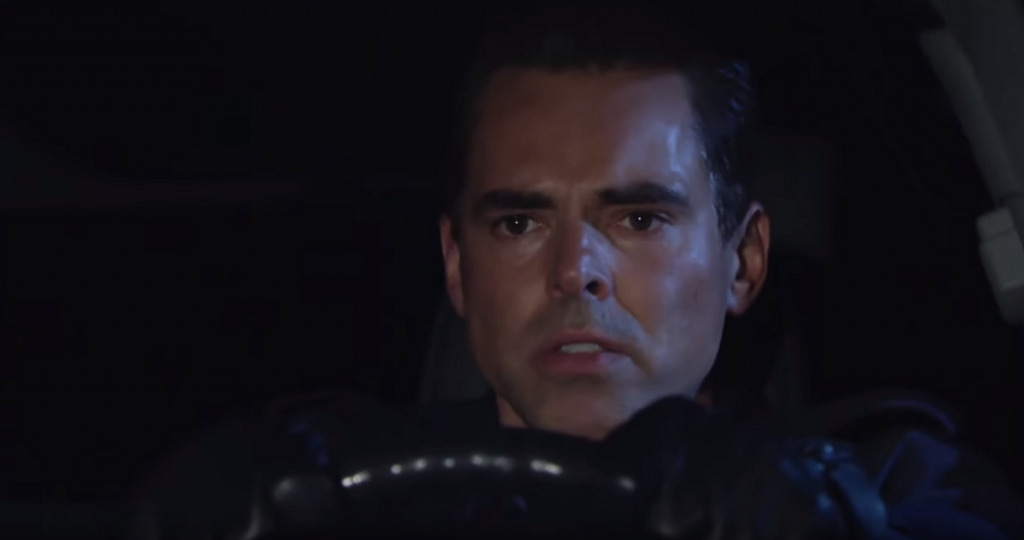 Adam Newman (Mark Grossman) is certain that Victor Newman (Eric Braeden) put out a hit on The Young and the Restless. But that faulty, Phyllis Newman (Michelle Stafford) coaxed conclusion is dead wrong. Victor didn’t order Adam’s run-down at the spot where Delia Abbott (Sophie Pollono) was accidentally killed.

Billy Abbott (Jason Thompson) is lying in a bed at the rarely seen Chancellor boathouse. He’s the man who morphed into a robot and tried to seek vengeance for his daughter’s death.

Adam hasn’t yet learned the particulars about this event. But when Grossman’s reeling character does something big seems bound to happen.

Y&R’s write of Thompson’s character to villain status is intriguing. Rather than simply have simply sought reprisal for the now historical loss of his daughter, as Chloe has done on more than one occasion, Billy’s personality broke.

Chloe was grieving and acting out of rage when she ruptured the gas line at the cabin in the woods in the fall of 2016. Adam (who looked like Justin Hartley at that time) survived the blast, but lost his memory, wound up in Las Vegas, Nevada, played high stakes poker for more than two years, and was eventually contacted by Victor.

One mid-range shot rang out at the Newman tack house shortly after Adam’s return to Genoa City, Wisconsin. It came from Chloe, who was just critiqued by Billy for not aiming higher. Even Kevin Fisher (Greg Rikaart) thought that was dark.

Chloe was serious when she told Billy that she’s been able to make peace with what Adam accidentally did to Delia. Now that she’s literally saved Adam’s life, Chloe should be able to see him in a different light as well.

Devoted soap fans certainly thought it was convenient that Adam didn’t see who was driving the vehicle that was heading toward him, or the person who pushed him out of the way. But suspending disbelief allows the audience to ride forward with this longtime arc’s shift.

Y&R Spoilers– Next Round Approaching

Just because Chloe has seemingly calmed her soul doesn’t mean that Billy will be able to do the same. Ditto for Adam.

Unless Billy is able to receive the long-term mental health treatment he needs, he’ll remain a threat to Adam. While Adam told Phyllis that he ruled out Billy as his assailant, he’s sure to learn the truth in the future. When that happens, the next dramatic round in this storyline will unfold.

Fans of ‘The Young and the Restless’ rightfully express their opinions on a regular basis. So, what happens when Adam learns that Billy is his assailant? Please vote in our poll below!

General Hospital Spoilers: Sonny Makes A Deal — Is It Enough To Keep Trouble Away?