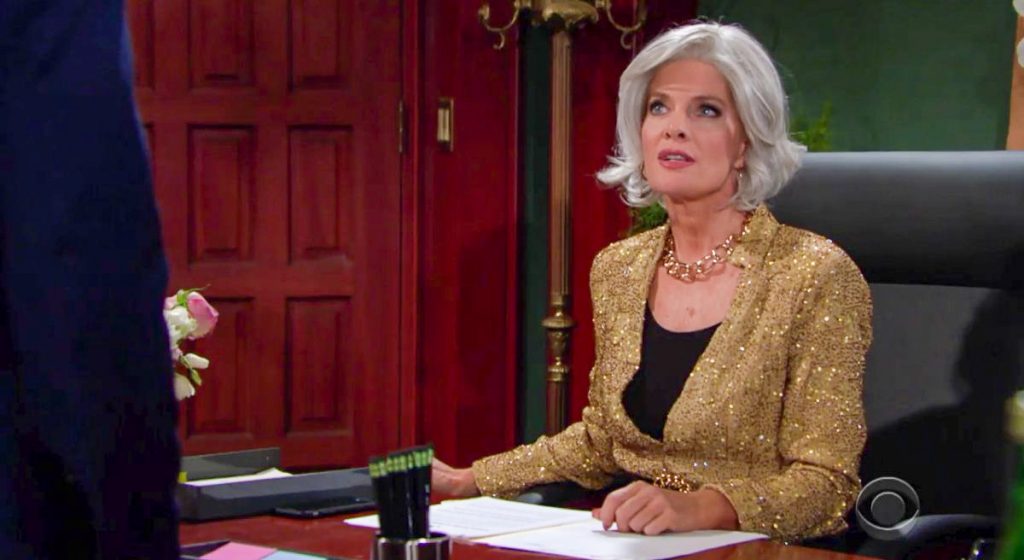 The Young and the Restless (Y&R) spoilers for the week of Monday, October 28 through Friday, November 1, 2019 reveal Jack Abbott (Peter Bergman) and Traci Abbott (Beth Maitland) are learning a very hard lesson when it comes to digging into the past when their book project exposes that they have a secret sibling out there. They will have a surprise visitor when matriarch, Dina Mergeron’s friend, Doris (Mary-Margaret Lewis) arrives in Genoa City to visit. What other secrets will Jack and Traci learn, the more they dig into the Abbott past?

Y&R spoilers tease that things may not be running as smoothly for the Abbott family as originally thought. Jack stepped away from Jabot Cosmetics in order to focus on the book with Traci, but now it seems he is being drawn into drama between his son, Kyle Abbott (Michael Mealor) and his brother, Billy Abbott (Jason Thompson); something Jack will have nothing to do with, proving him and Kyle are not in agreement and definitely not on the same page. How will Kyle react to his father’s “deception”?

Phyllis Summers (Michelle Stafford) continues to be conniving and determined to be on top. She will be tempted by an offer she receives this week, but who is the offer coming from and what are the consequences if she accepts?

The Young and the Restless spoilers tease a special treat for Halloween as it will be a day that haunts many of the residents of Genoa City. Pleasant dreams turn into nightmares as Phyllis’ control will turn for the worse. Rey Rosales (Jordi Vilasuso) will not be the nice guy cop, turning into a dangerous offender, thanks to the help of Sharon Newman (Sharon Case). Abby Newman (Melissa Ordway) who has stepped away from being the “Naked Heiress” and simply wants to be acknowledged as a serious entrepreneur will attract a lot of unwanted attention. Nick Newman (Joshua Morrow) who always wanted a life without his brother, Adam Newman (Mark Grossman), may get exactly that, but it is nothing like he wanted. Kyle Abbott is stuck in a time warp.

In other Y&R spoilers, Nikki Newman (Melody Thomas Scott) is forced into making a difficult choice as Chelsea Newman (Melissa Claire Egan) relives painful parts of her life. Will the Newmans ever be able to live a peaceful existence?

The Young and the Restless Spoilers: Theo Vanderway Related To The Abbotts? @celebratesoaps #yr #youngandrestlesshttps://t.co/Mo5gGw0MWW

Fans of the CBS soap opera will be excited to hear that Jeffrey Vincent Parise, an alum from the ABC daytime drama General Hospital has joined the cast of The Young and the Restless as Simon!!

Be sure to tune into CBS’ The Young and the Restless (Y&R) to catch up on all the exciting stories unfolding in Genoa City right now. Check Soap Opera Spy often for updates, news, rumors and spoilers!

Young and The Restless POLL: Will Adam Seek Formal Full Custody Of Connor?