The Young and the Restless Spoilers Wednesday, November 13: Jack Explodes Over Ashley’s Job Offer for Theo – Chance Flirts with Abby 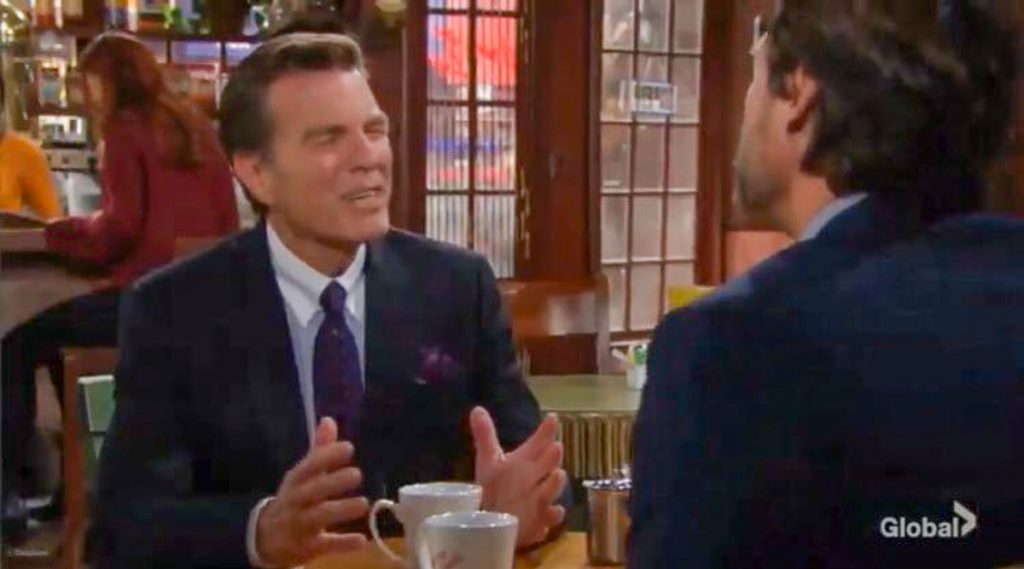 The Young and the Restless (Y&R) spoilers for Wednesday, November 13, tease that some hot drama’s ahead. Before we get to that, we should note that all four soaps will be preempted for impeachment hearing coverage. There’s a good chance Wednesday’s Y&R episode will be bumped to Thursday, November 14. Keep that in mind as you prepare for all the action happening in Genoa City.

Now let’s focus on this episode’s exciting scenes… At the Grand Phoenix, Abby Newman (Melissa Ordway) scrambles to keep guests from checking out. This is yet another PR nightmare for the hotel, which people are obviously struggling to view as a safe choice.

At the coffeehouse, Amanda Sinclair (Mishael Morgan) talks to Phillip “Chance” Chancellor IV (Donny Boaz) about Katherine Chancellor’s (Jeanne Cooper) will and her mysterious client. She feels like he will situation could be connected to Simon Black (Jeffrey Vincent Parise) and the hostage crisis. Amanda mentions that someone claiming to be Chance sent an email to put her on retainer.

Chance assumes Amanda was roped into all this because of her resemblance to Hilary Hamilton (Mishael Morgan). He learns Amanda spoke with this phony Chance once over the phone, but he sounded older than Amanda expected. Afterward, Nate Hastings (Sean Dominic) checks in with Amanda following her latest ordeal.

At Adam Newman’s (Mark Grossman) penthouse, he tries to reassure Connor Newman (Judah Mackey) with Chelsea Lawson’s (Melissa Claire Egan) help. They let Connor know he’s safe and in a very secure building, but Connor still wants his security blanket – one he hasn’t used in years. Adam promises to go get it from Nick Newman’s (Joshua Morrow) place and heads out.

Meanwhile, Nick and Jack Abbott (Peter Bergman) discuss all the hostage chaos. Jack suggests they should get ahead of this when it comes to Nick’s campaign. Next, Adam shows up looking for Connor’s blanket. Nick doesn’t want to give it until Adam shares Chelsea’s link to Simon, but Adam wants to focus on Connor right now. He convinces Nick to drop it for the time being.

Back at Adam’s place, he returns to find that Connor’s sleeping. Adam takes Connor to bed before confronting Chelsea about not filling him in on Simon. It put their son at risk. Adam wants Chelsea to trust him, so she gets choked up and assures him they’re in agreement.

After Adam pushes Chelsea to go explain things to Nick, she heads home. Chelsea’s sorry, but she was ashamed and truly wanted to protect Nick from what was going on. He’s not concerned about his campaign, but Chelsea knows it could be a real blow.

Back with Chance, he chats up Abby before Nate walks over. Once Nate exits, Chance asks Abby if she’ll get a drink with him later. At Adam’s penthouse again, Chance stops by and gets some words of gratitude. Adam thanks Chance for saving Connor and notes that they’re always ending up in messes. Phyllis Summers (Michelle Stafford) arrives and comments on how she suspected they’d be together.

Afterward, Lola meets up with Abby. They talk about how Summer returned and wasted no time in making her way to Jabot. Across town, Theo’s overwhelmed by Ashley Abbott’s (Eileen Davidson) offer. She reflects on being a non-blood Abbott and thinks they both feel like outsiders. Once Ashley hears Theo talk about his career, she urges him to come work for her in Paris.

Young and the Restless #YR Spoilers Wednesday November 13: Ashley’s Shocking Move, Summer Comes Back To Town, and Chance Has A Date @celebratesoaps https://t.co/jTugOvp0xM

Back with Kyle, he spars with Billy at the office again. Jack scolds them and suggests they’ll have to work this out together. Later, Jack’s livid over Ashley’s job offer. The family’s just now getting to know Theo, and Ashley’s trying to push him off to France. Ashley defends her proposal and thinks it would be good for Theo.

At the Grand Phoenix, Theo finds Summer and gets teased about what his last name should be now. They head upstairs for lovemaking, so it’s a busy day for Theo indeed! The Young and the Restless spoilers say some great scenes are coming up. We’ll keep you posted as other Y&R news and rumors emerge. Stay tuned to see what else is brewing in Genoa City.

The Bold and the Beautiful Spoilers: Hope Logan Refuses To Back Off – Destroying Two Marriages At Once