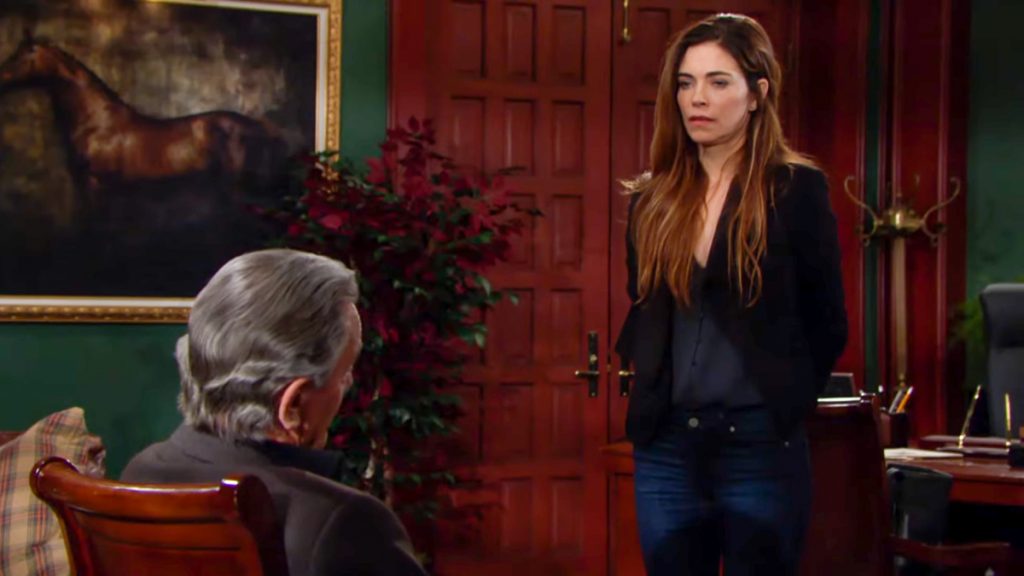 The Young and the Restless spoilers for Friday, October 11, tease that Jill Abbott (Jess Walton) will catch up with Cane Ashby (Daniel Goddard), who’s calling from Las Vegas. He’ll update her about not being able to find Chance Chancellor (John Driscoll) and that he found Adam Newman (Mark Grossman) with Phyllis Summers (Michelle Stafford). Jill will think that Cane should use Phyllis.

Later, Phyllis will show up at Cane’s door and she’ll say that she thinks they can help each other. She’ll also try to find out what bomb Chance dropped on his family. Cane will wonder why she’s interested in Chance, and Phyllis will say that she thinks she can use Adam’s association with Chance to draw him back to Genoa City. Cane will then get a text and Phyllis will leave. The text will supposedly be from Chance, who will give Cane a time and place to meet and request that he come alone.

Next on Y&R, Victor Newman (Eric Braeden) will greet Nate Hastings (Sean Dominic), who Nikki called over to the house. Victor will tell him that he is no longer CEO of Newman Enterprises, and Nate will say it’s the end of an era. After Nate leaves, Victor and Nikki will discuss his retirement and what he’s going to do now. Victor won’t like the idea of being retired and won’t know what he’ll do with himself. When alone, Victor will call someone and instruct them to call off the surveillance of Adam.

Next on Y&R, Elena Dawson (Brytni Sarpy) will find Devon Hamilton (Bryton James) doing research on Amanda Sinclair (Mishael Morgan). She’ll question why he’s not hiring someone to investigate her, but he’ll want to do it himself. He’ll say that he’s discovered that the statute of limitations has run out and Katherine Chancellor’s (Jeanne Cooper) will can no longer be challenged. Elena will think that he can just ignore Amanda and the whole issue, then.

But Devon won’t be able to let it go. He’ll explain that Amanda has no internet presence at all, and that he’s having Tucker McCall’s (Stephen Nichols) assistant flown to Genoa City. Elena will clearly not understand why he’s so into it all, and he won’t even stop to take a break. She’ll leave and Jill will arrive and update Devon about Cane’s trip to Las Vegas. Jill will understand that Devon doesn’t trust Cane, but she’ll wonder what will happen if the will that Amanda has are really Katherine’s final wishes.

Devon will get peeved and accuse Jill of wanting to make sure there are no hard feelings in the event that Cane is really the one who inherits the money. Jill will then leave, and Amanda will arrive. They’ll bicker a bit and she’ll reference her disappearing client, which will prompt Devon to say that she probably thinks they’re both being played. Amanda will then leave.

Next on Y&R, at Crimson Lights, Victoria Newman (Amelia Heinle) and Billy Abbott (Jason Thompson) will discuss his therapy session, then she’ll tell him that she’s now the CEO of Newman Enterprises. Billy will be happy for her, but disappointed that she won’t be coming to work at Jabot. She’ll then tell Billy to come with her. Later, they’ll arrive in Chancellor Park, where she’ll say that she asked the nanny to bring the kids because this is the stuff that counts.

Later, Billy and Victoria will celebrate together in a room at The Grand Phoenix. They’ll be glad to have snuck off for some alone time together.

Back at Crimson Lights, Elena will meet with Nate and relate her frustrations with Devon’s focus on Amanda and Katherine’s will. Elena will be worried that Devon is into it so much because Amanda looks like Hilary Hamilton (Mishael Morgan). Nate will do his best to reassure her, and he’ll say that Devon is probably wondering about Tucker’s role in the whole thing. Nate will say that it will all probably be settled soon.

Young and the Restless #YR Spoilers: Devon And Amanda Destined To Be Together – Elena Left Heartbroken @celebratesoaps https://t.co/tMpItLuP3P

Next on Y&R, Chance will contact Jill again and update her that he’s going to meet Chance and hopefully get some answers. They’ll discuss Devon, and Jill will remark that she understands him being upset but she’ll feel that they have to respect Katherine’s final wishes if indeed the new pages are the real thing.

Finally, on Friday’s new episode of Y&R, Cane will arrive in an industrial area looking for Chance. He’ll get hit over the head, knocked out, and dragged away.