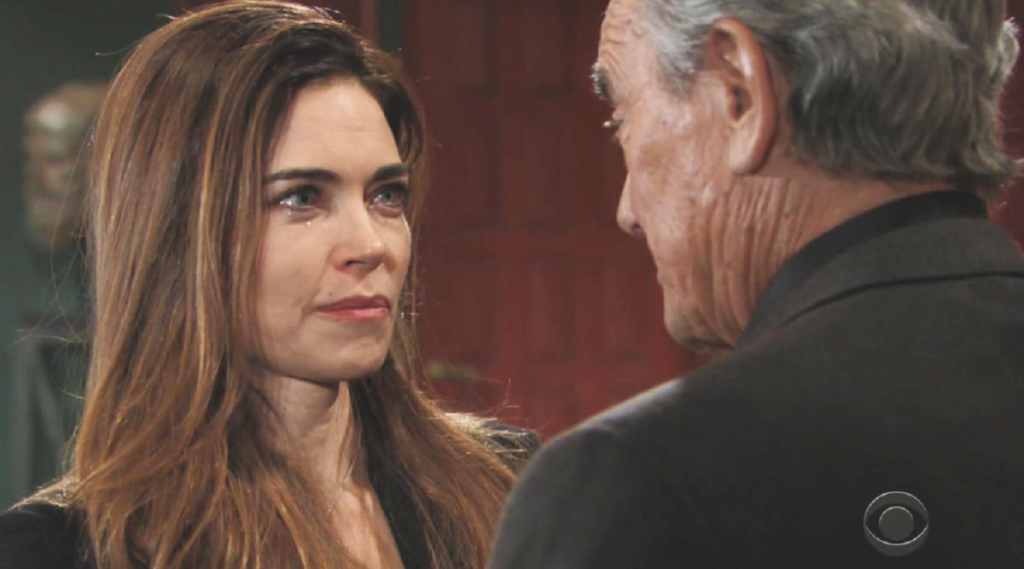 Victor Newman (Eric Braeden) made a very surprising decision on The Young and the Restless. When his daughter, Victoria Newman (Amelia Heinle) gave him an ultimatum, he accepted her pressured terms.

Vickie wasn’t enraged that her father was going to come back to the company. She anticipated that. But the fact that he didn’t talk with her about it and that she learned the news from a media leak, which may have been, or was put out by Victor himself, was just too much.

However, Y&R appears to be evolving the character Braeden portrays into a partial wise sage. And so the head of the Newman clan and Newman Enterprises, both of which are fully intertwined, willingly relinquished the Chief Executive Officer’s chair to his first-born child.

Viewers have often seen all of Victor’s children throw temper tantrums. Adam Newman (Mark Grossman) has been good at tossing many of those lately. That made Vickie’s throw of a metal letter opener to the collarbone on Victor’s oil-based portrait at Newman Enterprises’ office appear to be an entitled child’s outburst that would lead to another executive exit.

The sight of Vickie flying off the handle at The Grand Phoenix, when she learned about Victor’s latest move, felt like a pattern was about to repeat.

Longtime Y&R fans may have thought that Vickie would later accept Billy Abbott’s (Jason Thompson) proposal that she join Jabot. Instead, she rejected her long-time love’s generous offer. It was more of a personal, rather than a business, gesture, though fully well-intended.

Young And The Restless Spoilers – Nikki Newman’s Advice Was Heeded

‘Niktor’ is in a good relationship space at the moment and has been for a while. Nikki Newman (Melody Thomas Scott) stood by Victor’s side and was the key to the death hoax working.

With that storyline climax having happened, it seemed natural that Victor would push himself back into the game. His other love is the business he founded. But returning to head the conglomerate meant pushing Vickie down to Chief Operating Officer.

Nikki told Victor, in the strongest terms, that he should work on healing the family. She said his move to return as CEO would create further strife. As fans see, Victor took his wife’s advice to heart.

Do you think Chance is about to pop up on #YoungandRestless? https://t.co/o6AfE42L9n

Young And The Restless Spoilers – Victoria Newman In Charge Now

While she has used Newman’s revolving door on many occasions, Vickie was ready to fully commit to being CEO from here on out if her father accepted the ultimatum she bravely offered. Some might see her choice as petulant, or disrespectful. But not Victor, who saw himself in her and recognized that yes, she was ready.

Fans of ‘The Young and the Restless’ rightfully express their opinions on a regular basis. So, how long will Victoria run Newman Enterprises? Please vote in our poll below!

The Bold And The Beautiful Spoilers: Flo’s Gift Stuns The Logan Family– Will They See The Good In Her?

The Young And The Restless Spoilers: Plane Ride From Hell Makes Billy Confess He…