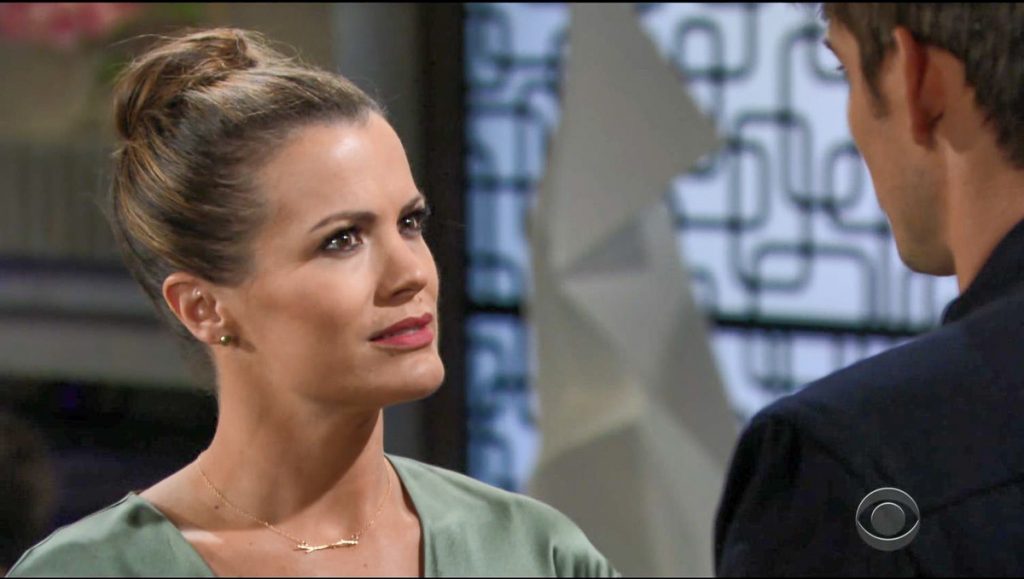 The Young and the Restless (Y&R) spoilers for Friday, November 1, tease that Chelsea Newman (Melissa Claire Egan) will want Nick Newman (Joshua Morrow) to take his clothes off – but not for THAT. At home, Nick is set to give a press conference and doesn’t have time for steaminess. Chelsea clarifies that he needs to change out of his Italian suit. It doesn’t send the message of down-to-earth Nick.

The Young and The Restless Spoilers – Victor Newman is happily retired

Talk turns to Chelsea and Nick’s pasts, but Nick does his best to ease Chelsea’s mind. At the ranch, Nikki Newman (Melody Thomas Scott) spots Victor Newman (Eric Braeden), who’s going to eat Halloween candy for breakfast and watch The Price Is Right. Victor can do whatever he wants now that he’s retired!

Later, Nikki arrives at Nick’s house and is thrilled about his run for city council. Nick wants Nikki to serve as his campaign manager, but she nixes the idea. She feels her Newman baggage would hinder Nick, but he truly believes she could help. After much debate, Nikki agrees to pitch in – but only in an unofficial capacity. He convinces her to attend his press conference, which Chelsea’s supposed to attend as well.

Kevin Fisher (Greg Rikaart) bumps into Victor at Society, where they have a tense exchange. However, Kevin promises Chloe Mitchell’s (Elizabeth Hendrickson) done going after Adam Newman (Mark Grossman). At the Grand Phoenix, Chelsea meets Simon Black (Jeffrey Vincent Parise). He calls her by the name Chelsea Boudreau and notes that she has something that belongs to him.

Simon brings up Calvin Boudreau (John Burke) and the money that was supposed to be in the storage unit. Chelsea pretends she’s clueless, but Simon needles her a bit about this beautiful hotel and how she’s landed on her feet. He mentions that life is short and wonders if Chelsea’s finished pretending now. Simon lets Chelsea know he’ll be in touch, so she makes a panicked call to Kevin.

Chelsea insists she needs the laundered money back, but Kevin can’t help. It’s gone! The Feds are investigating the bank, so all the accounts are seized. Chelsea freaks over the government taking her money and seems fearful. At the coffeehouse, Nick gets advice from Nikki and ultimately has to move forward without Chelsea. He announces his candidacy at the press conference and worries about why Chelsea didn’t make it.

Meanwhile, Amanda Sinclair (Mishael Morgan) speaks to someone over the phone and confirms that “he” is still at the same location. Next, Amanda goes over Nate Hastings’ (Sean Dominic) case with him. She pushes his buttons about Abby Newman (Melissa Ordway) and then admits she did it on purpose. Amanda wanted to see Nate’s reaction under pressure and notes that he’s not scared to defend himself.

Nate assures Amanda that he truly feared there was a threat to Victor. She wants to work this angle hard since Nate was willing to do anything to save his patient. That includes risking his own career. Amanda determines that they need to see Victor, who could be Nate’s best shot at keeping his license. She wants to do all the talking, but Nate can’t help himself when they find Victor at Society.

The Young and the Restless Spoilers: Theo Vanderway Related To The Abbotts? @celebratesoaps #yr #youngandrestlesshttps://t.co/Mo5gGw0MWW

Nate berates Victor for dragging him into this. He feels like Victor came out unscathed, but the good doc stands to lose everything. Amanda tries to put a stop to Nate’s outburst, but Victor wants to hear. Once Nate airs his grievances, Victor assures him that he’ll do anything he can to help.

Once Victor exits, Amanda scolds Nate for how he handled things. Over with Victor, he makes a call and urges someone to learn everything possible about Amanda. The Young and the Restless spoilers say some shockers are on the way. We’ll give you updates as other Y&R news and rumors emerge. Stay tuned to see what else is brewing in Genoa City.