Victoria Newman (Amelia Heinle) plans to stand up to Adam Newman (Mark Grossman) on ‘The Young and the Restless’. This fight will be fierce and likely, contracted. But which side is more likely to win?

Sure, both sides will get their knocks in and collateral damage will result. But Vickie has the power of Newman Enterprises behind her, along with the support of Victor Newman (Eric Braeden) and Nick Newman (Joshua Morrow).

Adam has himself and maybe, Phyllis Summers (Michelle Stafford). Both Y&r characters have proven capable of thwarting the various Newman’s through the years. But working together, they just might win hard.

Vickie made a naive mistake when choosing to believe that Adam would take her fifty million dollars and leave town. She sincerely believed that her just-resurrected and memory-restored brother wanted to locate Chelsea Lawson (Melissa Claire Egan), which was and is true. But circumstances changed due to the Christian Newman (Jude and Ozzy McGuigen) paternity battle with Nick. 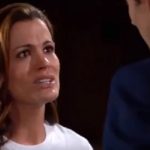 Young and the Restless Weekly Spoilers June 24 – 28: Kevin Reunites With Chloe – Chelsea Is Back – Nick Gets Dirt On Adam

Vickie’s offer to Nick is intriguing. She wants him to take her old role, as Newman’s Chief Operating Officer.

To some, it would look like Nick was merely helping his sister while their father is receiving his blood disease treatments. Adam would recognize that Nick accepted access to the family business for something deeper.

Y&R spoilers tease that Nick is intrigued by Vickie’s idea that they work together to set Adam up. Rather than rely on already adjudicated matters, they would create a new lure. However they hooked him, the fresh offense would top Adam’s resume and be used during the Christian paternity battle.

Young And Restless Spoilers– Can Adam Beat His Siblings?

Adam has Kevin Fisher (Greg Rikaart) working clandestinely for him. Different than Phyllis, who might develop into a true partner, Kevin is only fishing for information because Adam is forcing him to do so.

Chloe Mitchell (Elizabeth Hendrickson) is being held against her will. With that, Kevin must do as Adam asks. Michael Baldwin (Christian Le Blanc) may have to as well.

Kevin and Michael might be thought of as conscripted soldiers. Along with the presumed services of Phyllis, Adam might lead a small army, considering the collective brainpower that foursome represents.

Fans of ‘The Young and the Restless’ rightfully express their opinions on a regular basis. So, will team Adam or team Vickie win the battle? Please vote in our poll below!