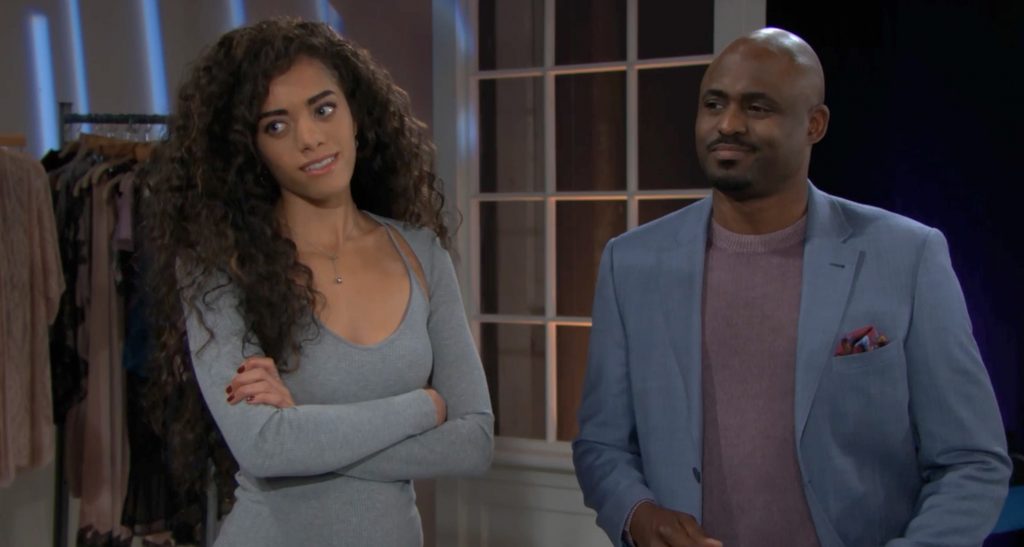 The Bold and the Beautiful (B&B) spoilers tease that viewers will soon see a familiar face back on canvas. It’s been a while since Zoe Buckingham (Kiara Barnes) has shown her face around the Forresters and the Logans, and for good reason. B&B viewers will remember that Zoe was summarily fired by Ridge Forrester (Thorsten Kaye) after the truth about Beth Spencer (River Davidson and Madeline Valdez) came to light.

Of course, both Zoe and Xander Avant (Adain Bradley) were fired from Forrester Creations at the same time. As B&B viewers will remember, Xander had just returned from England to check in on Zoe after leaving her in disgust when she wouldn’t come clean about the Beth secret. But now, it seems that Zoe will reappear when she bumps into none other than Thomas Forrester (Matthew Atkinson).

According to B&B spoilers, Thomas will be at his buddy Vinny Walker’s (Joe LoCicero) apartment complex when he happens to bump into Zoe. She might just end up living in the same complex as Vinny, or else she’ll have some other reason for being there. But she’ll definitely encounter Thomas, which should be an interesting meeting.

As B&B viewers will remember, Zoe and Thomas don’t exactly get along. Zoe certainly didn’t feel as much animosity toward Thomas as Xander did, but still Thomas threatened her during the whole Beth secret saga, and she’s always been worried about his potential involvement in the fatal car accident of Emma Barber (Nia Sioux). It should be interesting to watch the interaction between Zoe and Thomas now that a little time has passed and that Xander isn’t around.

According to ongoing B&B spoilers, both Zoe and Xander will eventually make a comeback and will search for redemption from the Forresters and the Logans. That will probably be a tough road, but perhaps Thomas will have something to do with that. Thomas seems determined to get back to Forrester Creations and he’s probably not going to stop until that happens. Could he possibly bring Zoe (or even Xander) back to Forrester Creations?

B&B spoilers also indicate that both Zoe and Xander will have ongoing concerns about Thomas, so it seems that they’ll certainly be in his orbit once again. We’ll see what happens there, but it will certainly be interesting to see what goes down between Thomas and Zoe when they bump into each other at Vinny’s.