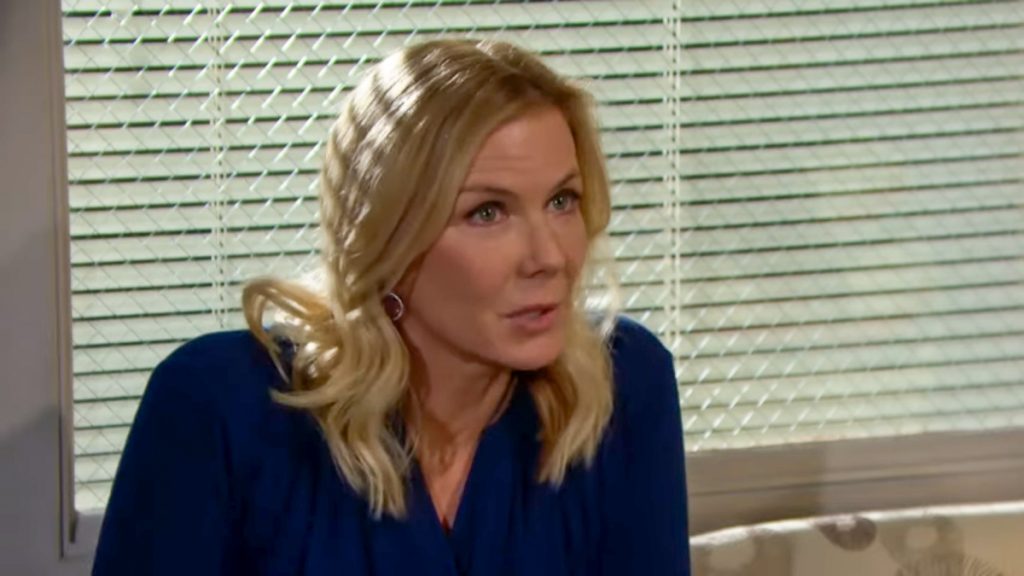 The Bold and the Beautiful spoilers for Monday, October 14, tease that Brooke Forrester (Katherine Kelly Lang) will be feeling frustrated and angry. As B&B viewers know, she and the rest of the family have just learned that Flo Fulton (Katrina Bowden) was Katie’s anonymous kidney donor. Everyone was stunned as Flo was wheeled into Katie’s room and revealed to be the donor who saved Katie’s life. It was a shocking moment for sure.

Brooke will be absolutely stunned by the whole reveal, and she’ll take her frustrations out on Flo’s mom, Shauna Fulton (Denise Richards). It looks like Brooke will pull Shauna aside for a private conversation, during which she’ll lash out.

According to B&B spoilers, Brooke will think that Shauna had ulterior motives in this situation, and she’ll be right about that. As B&B viewers know, Shauna encouraged Flo to donate her kidney and to use the situation to redeem herself with the Logans, the Spencers, and the Forresters.

Well, it seems that Brooke will call Shauna out on her motivation. Brooke will be livid that Shauna used the situation with Katie to create a redemption scenario for Flo, and she’ll let Shauna know that in no uncertain terms. B&B viewers can expect a feisty argument between Brooke and Shauna. Of course, Shauna is no wilting flower, so she’ll probably lash right back at Brooke.

B&B Spoilers – Katie Logan Thanks Flo Fulton For Her Sacrifice

But while Brooke’s first reaction to the big reveal about Flo will be anger and resentment, Katie will be feeling something quite different. Of course, she’ll be shocked by the revelation that Flo was her donor, and she’ll probably never be able to get over what Flo did to Hope Logan (Annika Noelle) by keeping Beth Spencer (River Davidson and Madeline Valdez) from her. But B&B spoilers say that Katie will also feel profound gratitude toward Flo.

In fact, it appears that Katie will offer Flo her sincere thanks for giving her the gift of life. Katie will realize what a huge sacrifice it was for Flo to give up a kidney, and she’ll be grateful that she’s able to go on with her life and be there for her son, Will Spencer (Finnegan George). Of course, Bill Spencer (Don Diamont) may have different feelings about the matter, since Flo lied about his granddaughter, but at least Katie will be sincerely thankful.

It will be interesting to see how the other members of Katie’s family react to the news about Flo, especially Hope. She’ll probably still feel completely betrayed by her cousin for keeping Beth from her. It will certainly be difficult for the family to reconcile the horrible deceit that Flo perpetrated on them with the great gift she’s given to Katie. There may be some lingering feelings of resentment toward Flo, but chances are, this will indeed be an important step toward redemption.