The Bold and the Beautiful (B&B) spoilers tease that Wyatt Spencer (Darin Brooks) is ready to move on with Sally Spectra (Courtney Hope). When she agrees that she’s missed him and things are going well for them, he cannot help himself but to ask her to move in with him.

However, Sally is cautious about it all and she is considering pumping the breaks on their reunion. She doesn’t see why he is rushing to get her to move into his house. Can Wyatt convince Sally it’s a good idea to move in? And, how will Flo Fulton (Katrina Bowden) complicate Wally’s reunion?

Read below about what’s coming up on B&B.

There no doubt that Sally isn’t excited to have Wyatt back into her life. The Bold and the Beautiful spoilers tease that she feels nervous about trusting him completely as he hurt her last time when he left her for Flo. According to Soap Opera Digest, she wants to believe that they are on solid ground now, but something inside her tells her that she may not be able to trust him completely—at least, not yet. 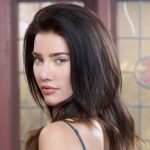 Bold and the Beautiful Spoilers: Steffy Wants To Settle The Score

Bold and the Beautiful Spoilers: Steffy Wants To Settle The Score https://t.co/nX7Put4kte pic.twitter.com/mVQLc2bl55

Before Sally makes any type of commitment or agrees to live with him, she needs to get a reading on him. She knows that Wyatt’s heart was recently broken when he discovered that Flo wasn’t who she claimed to be. And, in her eyes, that has to be considered.

Sally just wants to make sure she is thinking clearly, and she doesn’t have her head in the clouds. She has to look out for herself. Meanwhile, Sally is about to learn she has another issue complicating her relationship with Wyatt – and that is Flo.

Bold And Beautiful Spoilers –Flo Fulton Refuses To Give Up

Even though Wyatt claimed that he is done with Flo, his high school sweetheart refuses to give up on him. The Bold and the Beautiful spoilers tease that she will do whatever it takes to get Wyatt to forgive her. She cares about Wyatt and she still believes they are meant to be together.

It’s leading up to a complicated and twisted love triangle. And, before it’s all over, no one will guess who Wyatt picks. Don’t forget to come back later for more The Bold and the Beautiful (B&B) spoilers, news, and casting updates!