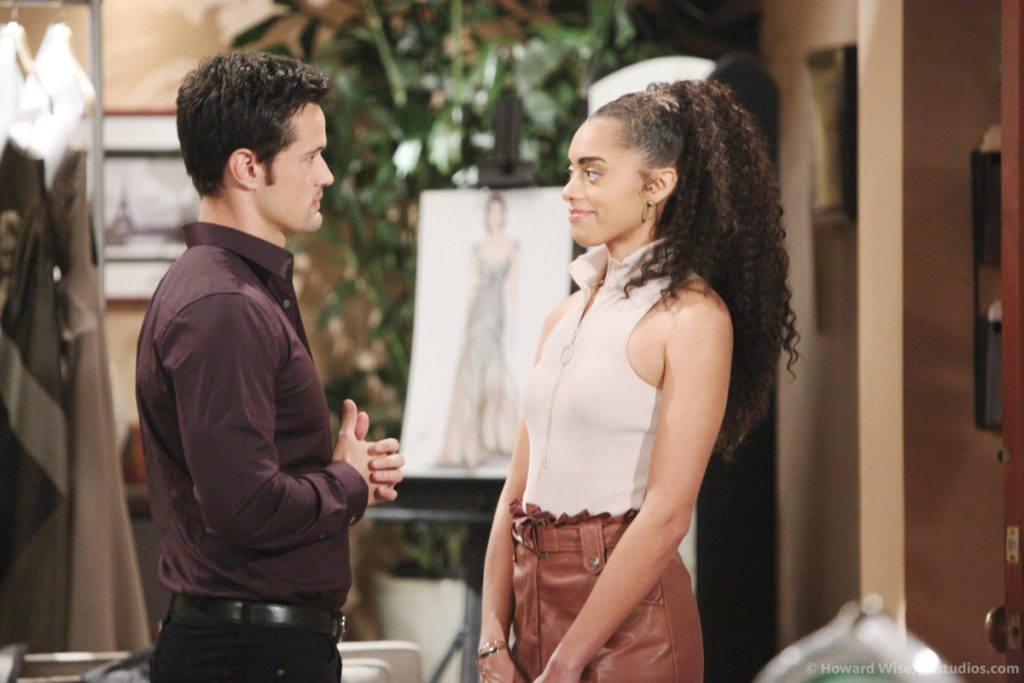 The Bold and the Beautiful spoilers for Tuesday, December 31, tease that the action’s really heating up on the CBS soap. But before we get to that, we have a quick programming note. B&B will air a new episode on Tuesday on the east coast, whereas on the west coast, the show will be preempted for The Sun Bowl. Then on Wednesday, January 1st, an encore episode will air on the east coast, while the new episode from Tuesday, December 31st will air on the west coast.

So, depending on where you live, you’ll see the next new episode of B&B on either Tuesday or Wednesday. On that episode, Thomas Forrester (Matthew Atkinson) will really ramp up his efforts to make Hope Logan (Annika Noelle) his. As B&B viewers know, he and Zoe Buckingham (Kiara Barnes) just had a romantic date at the Forrester mansion, and afterwards, the two made love.

According to B&B spoilers, Zoe and Thomas will spend the whole night together in the throes of passion and will wake up the next morning together. Of course, this is all happening because Thomas wants to prove that he’s moved on from his obsession with Hope. It’s the only way he can continue to work with Hope on her Hope For The Future line, so there’s a lot at stake here.

Of course, Zoe is supposed to be staying objective, as she’s been enlisted by Liam Spencer (Scott Clifton) and Steffy Forrester (Jacqueline MacInnes Wood) to root out Thomas’ real plan. The deal is that she’s supposed to learn from Thomas whether he’s still obsessed with Hope or whether he’s really moved on.

B&B Spoilers – How Will Zoe Buckingham Explain Her Actions To Liam Spencer?

Well, after spending the night with Thomas, Zoe will probably report back to Liam and Steffy that Thomas has obviously moved on. But something tells us that Liam won’t be so sure about that. He knows how manipulative Thomas is, and he probably suspects that Thomas might go so far as to sleep with Zoe to “prove” that he’s not obsessed with Hope…all so that Hope will let her guard down.

Now that Zoe and Thomas have been intimate, Thomas’ plan will be going strong. The Bold and the Beautiful spoilers say that he’ll invite Zoe to the Forrester Christmas dinner as his date. Of course, that’s all for show – he’ll want to have Zoe on his arm to show everyone just how “reformed” he is.

Meanwhile, Brooke Forrester (Katherine Kelly Lang) and Ridge Forrester (Thorsten Kaye) will spend some quality time together. As B&B viewers know, they’ve had a really rough time lately in their marriage. They separated a while back and recently signed divorce papers when they couldn’t agree on the issue of Thomas.

Well, they’ll decide to look back on some of their better days, perhaps as a way to convince themselves to do something to save their marriage. According to B&B spoilers, Ridge will reveal that he hasn’t yet filed their divorce papers, and he’ll probably say that he hopes he never has to file them. But can these two ever get past the critical issue of Thomas and save their marriage?

Bold And The Beautiful Spoilers: Liam Proposes To Hope, But With A Shocking Stipulation @celebratesoaps https://t.co/fElltqdnnI

It looks like at least Ridge will be willing to try. B&B spoilers say that he’ll ask Brooke to spend Christmas at the Forrester mansion, but Brooke may refuse, since being with the Forresters will mean that she’ll have to spend the holiday with Thomas. They may end up spending Christmas apart, which will make their trip down memory lane that much more poignant.